A Medical Cannabis Conference
By Patients, For Patients

Patients Out of Time, a patient advocacy group, will host the 4th National Clinical Conference on Cannabis Therapeutics: The Body-Mind Connection. According to conference planners, "The accreditation of our education work by UCSF's Office of Continuing Medical Education, coupled with the co-sponsorship of the California Nurses Association has ensured that the US federal government's claim that cannabis has no medicinal value will be completely rebutted."

Multiple members of ASA's Medical and Scientific Advisory Board have been asked to present. Included in the conference will be Dr. Robert Melamede's discussion on "Cannabinoids and the Physics of Life," Dr. Rick Doblin's update on the federal government's obstruction of privately funded research, and Philippe Lucas' research on "Therapeutic Cannabis Use During Pregnancy and It's Efficacy Treating 'Morning Sickness'." In addition, international researchers will present a diverse range of topics useful to patients, caregivers, researchers, and physicians. While various issues will be covered, the focus will be placed on both physical cannabis treatment and the use of cannabis for emotional or psychological problems.

Started in 2000, the Conference on Cannabis Therapeutics brings together current and future leaders in the medical cannabis movement. It is the only national conference organized specifically by patients where attendees will learn about the scientific evidence supporting the therapeutic use of cannabis. Perhaps most importantly, it offers the opportunity to meet, network, and share experienced with a diverse national gathering of patients, our allies and supporters.

Supporters rally behind Aaron Paradiso at one of his pretrial hearings. (Photo by Vanessa Nelson)

Aaron and his mother Debra, who acts as his caregiver, were arrested in August 2003 when sheriff's deputies found 52 marijuana plants at his house, and they were charged with felony cultivation and possession for sales. Charges were dropped against Debra, and Aaron's case was later dismissed on a technicality in December 2004. The district attorney immediately reinstated the case against Aaron and his mother.

Throughout Aaron's hearings, ASA and other local groups organized grassroots and media support for his case. At one of his preliminary hearings, more than two dozen patients and advocates packed the courtroom, including carpools of patients that had traveled to Stockton from the Bay Area and Sacramento. This support and successful press outreach by ASA staff led to several positive media stories in the local press.

Aaron recently thanked ASA, "Your support was crucial to my victory. One of the conditions of my plea bargain was that I would stop the medical marijuana rallies, and that there would be no demonstrators, banners, or t-shirts present at my pleadings."

Sacramento medical marijuana patient Amanda Whittemore received a notice of re-examination from the DMV in February 2005, after an encounter with police. Despite no charges being filed, the DMV questioned Whittemore's driving abilities.

After being forced to retake the driving test, Whittemore failed due to a supposed lane change violation, and in August 2005, her license was revoked. Americans for Safe Access filed an appeal on Whittemore's behalf, and ultimately got her license re-instated by December 2005.

No sooner did ASA celebrate Whittemore's victory, than another patient reported the DMV revoking a driver license based on medical marijuana use. Matt Vaughn of the Medical Marijuana Caregivers Association of El Dorado County was pulled over by CHP on June 5, 2005 in Glenn County.

Ignoring his status as a patient, the CHP confiscated Vaughn's pipe and 36 grams of his medicine, and charged him with possession. Despite the fact that his case was dismissed by Glenn County Superior Court on November 9, 2005, the DMV revoked his license, citing his supposed habitual drug use and claiming that he was unable to safely operate a vehicle.

On January 27, 2006, ASA filed a Writ of Mandamus in El Dorado Superior Court, appealing the license revocation by the DMV. The case is currently pending in that court. 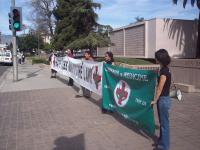 Advocates unfurl banners stating "Cannabis is Medicine" and "Safe Access It's the Law."

In early February, Inland Empire ASA launched in response to Riverside and San Bernardino Counties considering joining San Diego County in their lawsuit against the state to overturn prop 215. On February 7th Inland Empire ASA, LA ASA, and local patients & advocates attended the board of supervisors meetings in each county. The group also organized rallies of a couple dozen patients in front of each of the county buildings and received significant local press coverage. Riverside County decided not to even discuss joining the lawsuit, but despite the moving testimony from patients, San Bernardino County voted to join the San Diego suit.

On Friday February 10th, the Cannahelp Collective in Palm Desert was delivered a letter from the city, which advised that there would be a hearing on February 23rd to revoke their business license. On the date of the meeting, IE ASA rallied along with Lanny Swerdlow of MAPPS and several patients & advocates. They received a lot of support from the public as they passed in their cars.

Ultimately, Stacy Hochanedel, the owner of Cannahelp, reached an agreement with the city to continue operating, but to serve Riverside County Medical Marijuana ID Card carrying patients only. Summer Glenney, a local ASA organizer said, "We feel it is time for the patients and advocates to band together and tell their county that the ID card is voluntary by law and cannot be made mandatory."

Over the past four years, ASA's grassroots has grown exponentially and has changed in the process. Dozens of local groups have organized themselves as ASA chapters, while other like-minded groups have consistently worked on ASA campaigns. There are also tireless individual ASA activists who have planned ASA actions or worked on ASA campaigns. Our local activists keep our national campaigns going strong. Please join or start a local ASA chapter or affiliate in your area. To find out if one exists already, look here: www.safeaccessnow.org/localresources or call Rebecca at the ASA office. For more information about the responsibilities and benefits of being involved with ASA, read our organizing handbook: www.safeaccessnow.org/organizinghandbook