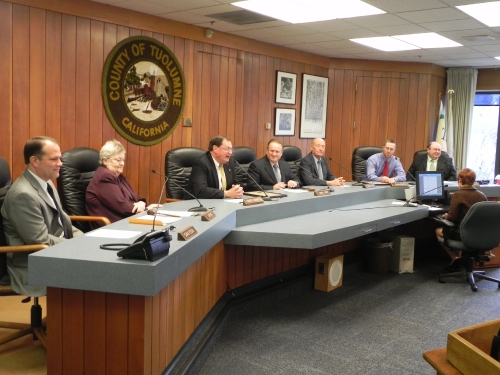 The Tuolumne County Board of Supervisors met in Sonora on Tuesday to hear a proposal by the District Attorney and Sheriff’s office to ban outdoor cultivation of medical cannabis and to effectively zone dispensaries out of existence. The room was filled mostly with the authors and enforcers of the proposed ordinance who faithfully dragged reefer madness memes out of their intellectually bankrupt arsenal of prohibitionist arguments to appeal to the emotions of an admittedly ignorant Board of Supervisors.

The Live Oak ban on cultivation seems to be serving as the all-clear signal for tyrannical municipalities across the state to push for similar bans before the appeal restores the voters’ will.  The DA made no qualms about his desire to ban medical cannabis cultivation “de facto” through excessive zoning regulations. This seems to be the last grasp at a legal loophole for municipalities that know they are flagrantly violating the voters’ will. They are depending on the public to remain uninvolved in the democratic process so they may carry on without them while imposing “de facto” prohibition.

Thankfully a handful of patients and caregivers were in attendance to carry out the noble task of educating the Board of Supervisors about cannabis and California law. Sara Herrin RN, BSN was there to represent patients she once provided for through Today’s Healing Collective. The collective was raided in May 2011, but all charges were dropped after a two year trial. She stressed the importance of compassion and safe access for marginalized patients who lack the health and resources to cultivate their own medicine. The proposed ordinance would limit cultivation to 32 square feet indoors, while leaving the Sheriff’s department to enforce what is being floated as a “zoning” ordinance banning all outdoor cultivation and collectives.

One popular (and apparently effective) tactic used by the DA was the “marijuana causes crime” appeal to fear. Tom Liberty of Collective Patient Resources revealed the fallacy in this argument by quoting SFPD Officer Danielle Newman on the spike in violent crime as it relates to smart phones; “Over 50 percent of daily robberies have to do with smart phones and up to 67 percent of robberies include mobile devices of any sort.” If violent robberies positively correlate with the presence of mobile devices, we should just ban smart phones right?

As history has taught us however, prohibitions in general tend to backfire by unsuccessfully legislating “morality” then handing whole segments of the economy over to organized crime syndicates and their counterparts in government; law enforcement. What is fundamentally a human rights and natural rights issue continues to be framed by law enforcement as (Surprise!) a criminal justice issue. The ordinance will be reviewed by the planning commission and brought before the public for discussion in January. Please take a minute to contact the planning commission and encourage them to uphold the voters’ will.

This is what a failing prohibition looks like. Legalization is right around the corner, and law enforcement is frantically clamping down in hopes that asset forfeitures and federal subsidies will continue to fill their war chest. Educating elected officials locally is the most effective way to alleviate the devastation caused by prohibition. Send your local representative(s) a copy of ASA’s report“What’s the Cost?”to inform them of this trillion-dollar failure.