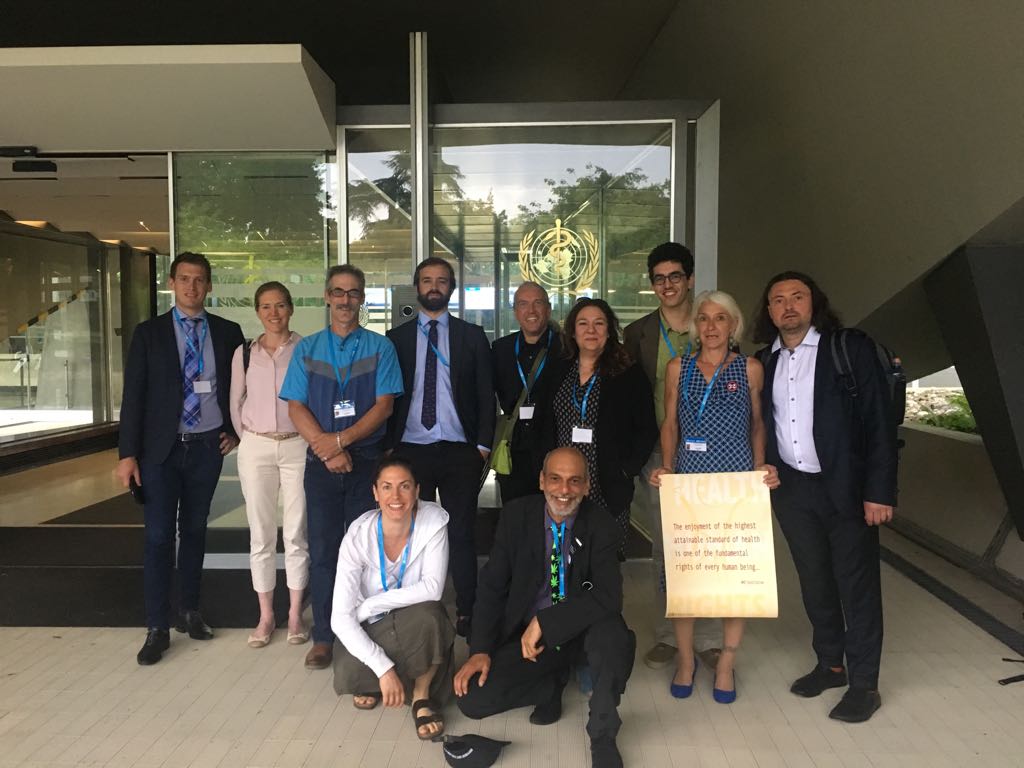 This week medical cannabis patient advocacy groups from Argentina, Mexico, Uruguay, France, Germany, New Zealand, the Netherlands, South Africa, and the United States travelled to Geneva, Switzerland to present to world leaders their recommendations for rescheduling cannabis at the 40th meeting of the World Health Organization's (WHO) Expert Committee on Drug Dependence (ECDD).

The air was filled with excitement that the ECDD was finally beginning the process of looking at new information regarding cannabis as medicine. A process that has been long overdue considering the original scheduling of cannabis was created based on a report produced by the Health Committee of the League of Nations back in 1935. International bodies have been calling on the WHO to address the scheduling of cannabis for almost a decade, and the WHO finally listened.

This is a milestone moment for medical cannabis patients, as the agenda of the meeting is dedicated to carrying out pre-reviews of cannabis and cannabis-related substances and will be reviewing and assessing the medical uses and harms of cannabis, in order to recommend the most appropriate classification to be applied internationally.

Executive Director Steph Sherer, along with members of the International Medical Cannabis Patients Coalition (IMCPC) were there to give testimony and deliver 1 Critical Review and 3 Pre-Review reports on Cannabidiol (CBD), Cannabis plant and cannabis resin, Extracts and tinctures of cannabis, and Delta-9-tetrahydrocannabinol (THC). ASA and IMCPC co-produced these reports which included references and recommendations for the committee to use in their review. The reports are responses to the WHO’s ECDD technical documents, which outline the medical efficacy, toxicology, and epidemiology of various preparations of cannabis (WHO reports can be downloaded here).

This process started many years ago. In 2015 at the ECDD’s 37th Meeting, ASA and IMCPC members addressed the committee in Geneva, calling for the members to act on the recommendations of CND and INCB by moving forwarded with the needed critical review document. In early 2016 ASA created their own critical review, Cannabis and Cannabis Resin Critical Review Preparation Document and delivered it to the United Nations General Assembly Special Session (UNGASS) in April, 2016. During this meeting leaders from all over the world joined together to discuss global drug policies, including what to do about medical cannabis. In December, 2016, the ECDD finally decided to move forward with preparing the pre-critical review documents on cannabis that are now being discussed at this meeting.

Through ASA and IMCPC, patients have had international representation at the WHO and the United Nations and generated thousands of letters from over 75 countries to UN Ambassadors calling for reconsiderations of cannabis’ scheduling.

Current international policies on cannabis are outdated and are having a detrimental impact on patients in the United States and worldwide. These policies no longer reflect the reality of over 30 countries globally that have passed medical cannabis laws. The reports posted by the WHO are supportive of nations considering rescheduling or de-scheduling CBD, pure-THC, cannabis, and cannabis extracts. With reports showing that the public health risk of cannabis and its extracts are minimal, it is our hope that international leaders will expand access through policy recommendations and changes.