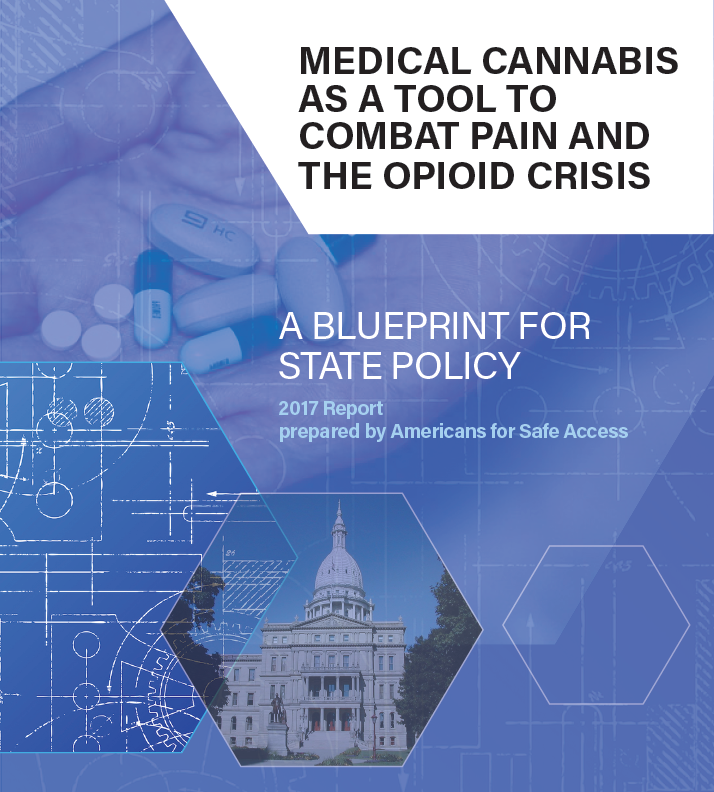 Medical cannabis is a proven alternative to treat chronic pain. Medical professionals and researchers have released studies demonstrating its positive effects and overall benefits to public health. However, medical cannabis programs are serving just 2 percent of the population in most of the thirty states, Washington, D.C., Puerto Rico and Guam that have so far passed laws (another sixteen have passed more limited laws). One-third of the U.S. population is living with chronic pain, and they all deserve access to medical cannabis. The blueprint lays out the specific barriers to access contributing to this disparity and provides lawmakers with the legislative means to reduce those barriers.

“I am excited to introduce this book to potential bill sponsors in my state,” said Jamie Lowell, a medical cannabis advocate and organizer in Michigan. “Medical cannabis allowed me to wean myself off of opiates, and I’m hopeful that by introducing this model legislation, we can reduce some of the barriers to medical cannabis and help even more Michigan patients.”

The report features model legislation, an emergency proclamation, and flow charts that help lawmakers identify barriers to access that medical cannabis patients in their states are facing. It also highlights the state of Michigan as a case study to illustrate how many individuals are potentially excluded from state medical cannabis programs. Michigan filed emergency regulations December 4th, which will improve product safety standards through testing and security. However, as the state develops legislation to manage the program for the longer term, it should look to the model legislation included in this blueprint to eliminate many of the current barriers to patient access.

“As many state legislatures are currently pre-filing bills for the 2018 legislative session, this report provides a critical toolkit for states to respond to the opioid crisis and be ready in their upcoming sessions to introduce legislation that will not only improve their state cannabis programs, but lower the instances of opioid addiction and overdose deaths. It has been nearly two months since President Trump declared the opioid crisis a public health emergency. However, since this declaration, there has been no effort on the federal level to provide funds for this crisis,” said Steph Sherer, Executive Director of Americans for Safe Access. “It is clear that states will have to take healthcare outcomes into their own hands. This report gives them the framework and tools they need to make cannabis an option in their fight against the opioid epidemic.”

This report comes on the tail of the President’s Commission on Drug Abuse and Combating the Opioid Crisis report issued on November 1, 2017. The Commission’s report identified over fifty solutions to the crisis, but failed to include the utility of cannabis, even though states with medical cannabis programs have witnessed a 25 percent reduction of opioid overdose deaths. It’s time for every state to enact programs that will provide access to medical cannabis for all chronic pain patients, and the guidelines provided here will help new states and those with existing programs to better respond to the opioid crisis which the Centers for Disease Control have estimated cost 65,000 lives in 2016.