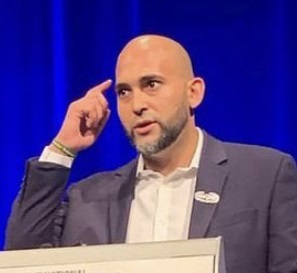 My name is Jose Belen. I am a United States Army Field Artillery combat veteran who proudly & honorably served his country. It is my sincere and heartfelt plea on behalf of veterans like myself for my fellow brothers and sisters in arms to have immediate compassionate access to medical cannabis distributed by the VA. Every day, we carry psychological torments from the battlefield in our minds. Those psychological torments are one of the driving forces in the suicide epidemic among veterans.

I nearly took my own life several times since coming home from the battlefield. The reality for most of us is that the battlefield never leaves our minds. Inside we hear the screams of the innocent and from our own brothers and sisters in arms. For some of us, the color red takes us back to the moment we saw  the blood of those who paid the ultimate sacrifice. The trauma I just described is a daily occurrence for many of us. Finally having access to medical cannabis here in the state of Florida has helped me manage that trauma. It has allowed me to be the husband my wife deserves and has given my children the father they deserve.

I have personally attended too many funerals of veterans we have lost to sucide. I’ve hugged the mothers, the fathers, the sisters, etc of veterans we have lost to suicide. These families are suffering and hurting inside because their hero didn’t have access to cannabis; instead they followed the protocols and prescriptions but ultimately took their lives because there was and still is something missing. Therefore we must fix this issue immediately; we owe it to not just the brothers and sisters that we’ve lost, but their families too.

With only state programs in place, part of the problem of accessing medical cannabis remains unaddressed. Many veterans cannot afford to shop at a dispensary especially those who do not yet have a rating. Moreover, those who have a rating, especially 100% disabled veterans, should not have to use their VA disability to pay for a medicine that can help us naturally heal. I find it abhorrent that at this time the VA can overnight prescription pills, but cannot with the same capability overnight Veterans a natural medicine that has been on this earth for thousands of years.

8,000+ veterans kill themselves in VA parking lots annually. They do so after going unheard for too long by those we trusted to care for us once we come home. Think about those who are in constant pain, who've lost limbs or are incapacitated. They too deserve access. We all do. Veterans were there for you....NOW IT IS TIME FOR YOU TO BE THERE FOR THEM!

As a veteran who nearly took his own life multiple times. It is not because we no longer want to live....it is because we find ourselves hopeless. Hopeless in our journey to one day be whole again. By making the right choice today you are choosing to stand hand in hand with our veteran community. We must ensure that their lives are not defined by how they died, but that we remember them by how they lived courageously through their struggle. We will continue to live on through the hope that this will provide to that next veteran who is thinking about taking his or her life today, tomorrow, and beyond. This action is not only about saving veteran lives...but also giving veterans reasons to live again.