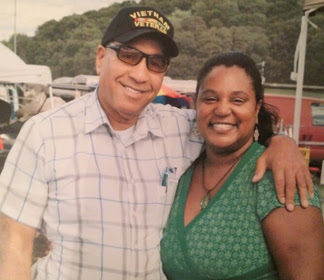 Her husband’s care through the Veterans Health Administration required lots of management, dealing with increasing pain and the effects of a misdiagnosis and surgery that didn’t heal. Soon, Valencia quit her job of 18 years in the health food industry so she could advocate for him. His situation spiraled quickly through rounds of radiation and chemotherapy that changed nothing.

“He did everything he was told but got no relief, no comfort.” says Valencia. “I don’t understand medical industry.”

So she got on the internet and started looking for alternatives. New York had just passed its restrictive medical cannabis law, but it was not yet fully operational. Valencia reached out to a doctor in Minnesota, and he put her in touch with Americans for Safe Access, who helped her with more information.

Since New York requires physicians who write recommendations in the state to have a special registration, and the program had just launched, there were very few doctors.

“It really was a process,” Valencia says. “I was just getting angrier.”

On March 11, 2016, New York state issued her husband a card. Now the problem was accessing quality medicine. She tried the most expensive strains and CBD oil. Nothing she could get seemed to be strong enough to control her husband’s pain.

Nor was it easy to get it to him. By now, he was in a care facility that was not supportive of using medical cannabis, so Valencia had to disguise the medicine she took him.

“I just wanted a better quality of life for my husband,” Valencia says. “It was a very traumatic way of dying.”

“If he’d had better access sooner, he wouldn’t have suffered as much,” says Valencia. “New York is very hard, very frustrating.”

Determined to learn more and make a difference for others, Valencia applied to ASA for a scholarship to attend the Unity Conference in Washington, D.C. last April. There she met advocates from all over the world and came away equipped with new contacts and information. From there, she went to Albany with the Drug Policy Alliance to lobby the New York state legislature for better laws and policies.

“I’m going back to work, looking for a job that will let me help open people’s eyes,” says Valencia. “We have more to learn, but this medicine can help people’s suffering,”