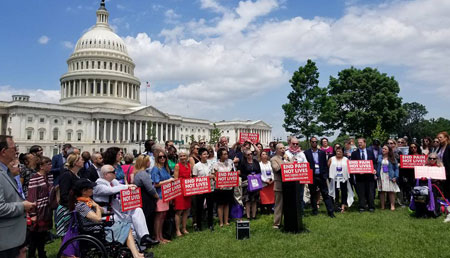 ASA’s 6th Annual National Unity Conference began this year with citizen lobby day on May 23. Before heading to Capitol Hill on chartered buses, lobby day participants heard opening remarks from ASA Executive Director, Steph Sherer, a briefing on the “Opioid Crisis and Federal Policy,” and a workshop on the “ABC’s of Citizen Lobbying.”

Participants also viewed an introduction video from Sen. Elizabeth Warren (D, Mass.), who told conference attendees that her state of Massachusetts provides an example of what “sensible and safe cannabis market can do to promote public health and safety.” She encouraged advocates to work for national legislation such as the bipartisan bill she introduced with Sen. Corey Booker (D-NJ) to protect those who participate in state programs from federal prosecution. “Thanks for being on the right side of history,” she said.

In the afternoon, over 100 patients and advocates gathered in front of the Capitol for a press conference with elected officials to highlight the need for national legislation that would allow cannabis to be used as a tool for fighting the opioid crisis. 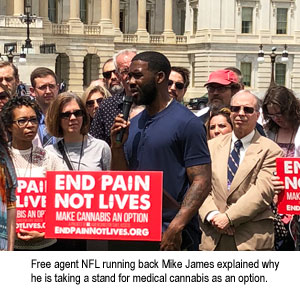 Speakers at the press conference included elected officials from both sides of the aisle, including Republican Rep. Matt Gaetz (FL-1), the chief sponsor of the Medical Cannabis Research Act, which would authorize research into the medical benefits of cannabis, and Democrat Rep. Steve Cohen (TN-9), cosponsor of the CARERS Act in the House of Representatives.

Joining lawmakers were advocates such as veteran Patrick Seifert from Twenty22Many-Olympia and parent-caregiver Mark Zartler. Ethan Russo, MD, Director of Research and Development for the International Cannabis and Cannabinoid Institute (ICCI) also spoke, as did veteran NFL running back Mike James, currently a free agent. James is the first NFL player to request a “therapeutic use exemption” for medical cannabis, which was featured in a recent CNN documentary.

Following the press conference, advocates fanned out to lobby elected officials and their staffers in scores of meetings arranged by ASA. Advocates urged lawmakers to pass federal legislation to remove barriers to safe access and research.

On May 24, the plenary sessions of ASA’s 6th annual conference started out with a screening of “The Life She Deserves” along with Q&A with Beth Collins and the documentary’s director, George Burroughs, and writer-producer John Hudak of the Brookings Institution. Following the documentary screening, participants enjoyed a full day of expert panels on medical cannabis policy, product safety, education, research, and action and learned how all these tie into helping the opioid epidemic. 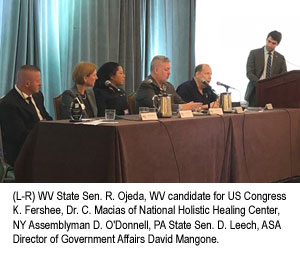 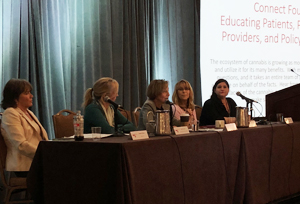 Following lunch, ASA Associate Director, Debbie Churgai, led the panel “Connect Four: Educating Patients, Physicians, Providers, and Policy Makers,” which featured a discussion of how various stakeholder groups can spread the truth about medical cannabis. Panelists include Meredith Fisher-Corn MD, editor-in-chief of TheAnswerPage.com, one of the leading online medical education resources; Deb Kimless MD, medical director of ForwardGro, one of Maryland’s premier growers of medical cannabis; Sarah Laucks, director of education and events for Abilities Expo, which produces shows all over the country for the community of people with disabilities; and Debby Miran, a former commissioner of the Maryland Medical Cannabis Commission.

Concluding the day was “People over Process: Making Lives a Priority in Public Policy,” which showcased successful citizen lobbyists who described how to be effective. Moderated by ASA Board of Directors member Don Duncan, other panelists were Christine Stenquist from Together for Responsible Use and Cannabis Education; Julie Prom, director and veterans outreach coordinator for Illinois Women in Cannabis; Ellen Lenox Smith, co-director of the U.S. Pain Foundation; and Diana Dodson, who has participated in clinical cannabis trials and advocated in the media. 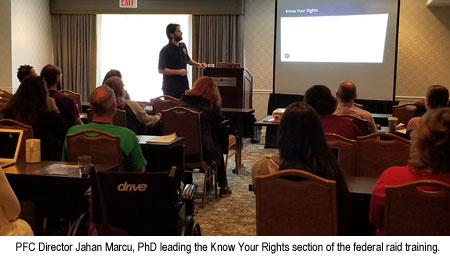 A training on handling federal law enforcement encounters was held in Washington, D.C. the day following ASA’s 2018 National Unity Conference. This special Patient Focused Certification (PFC) training taught participants how to be prepared for law enforcement interactions of all kinds. This federal raid training is appropriate for patients, providers and anyone working in the medical cannabis industry. For information on how you can attend or host such a training, go to patientfocusedcertification.org.

Despite a challenge from opponents, a medical cannabis initiative has qualified in Utah. A campaign to get voters in Utah to remove their names from the initiative's petition failed to attract the support it needed to block the measure.

The lieutenant governor, the state’s election chief, certified the signatures last month, ensuring it will be on the state’s November ballot. Officials say the Utah Patients Coalition submitted 153,894 valid signatures from 27 of 29 state Senate districts, about 40,000 more than needed. To qualify, initiatives must have signatures from voters representing at least 10 percent of the total vote in the last presidential election in at least 26 Senate districts.

Opponents had claimed that people were misled in signing the petition and mounted a campaign to get voters who had signed the petition to revoke their support by filing a form with the state. Only 1,425 people submitted valid requests to remove their names.

A recent poll found that 72% of Utahans support the measure. That super majority pales in comparison to the 93% support nationally found by a recent Quinnipac University poll, but it marks a broad willingness to ignore the opposition of the state’s LDS church and political leaders.

Utah voters will decide on a medical cannabis program that would license cultivation and dispensary operations to serve qualifying patients. Those registered will be eligible to obtain from licensed dispensaries edible and topical forms of cannabis medicines and low-THC, high-CBD oils that can be vaporized.

If passed, patient registry cards are to be available by March 2020, and cities will be required to allow state-licensed medical cannabis operations. Medical cannabis would be exempt from sales tax in Utah. Personal cultivation of up to six cannabis plants will be allowed starting in 2021 for any patient living farther than 100 miles from a licensed dispensary.

Pennsylvania will expand its medical cannabis program to add four new medical conditions and allow all qualified patients to obtain and use whole-plant cannabis products that can be vaporized. The change was recommended by the state’s medical cannabis advisory board and announced last month by the head of the state Department of Health, Physician General Rachel Levine, M.D.

Access to dry leaf or flower form of cannabis should lower costs for patients, who currently only have accessed to more highly processed, labor-intensive forms.

The state will also add to its list of 17 qualifying conditions spasticity, cancer remission therapy and neurodegenerative disorders, as well as opioid addiction therapy. ASA’s End Pain, Not Lives campaign has been working to persuade policy makers to make cannabis available as an alternative to opioid medications.

More than 30,000 patients have registered in Pennsylvania so far. Dispensaries began serving patients in February. Currently, two licensed cultivators are providing cannabis for nine dispensaries in the state, with an additional six cultivators and eight dispensaries slated to begin operation soon.

Physicians must also register with the state and be approved in order to provide a valid recommendation. Of the nearly 1,000 doctors who have registered, more than half have been approved to date. The Department of Health also announced last month that physicians now may opt out of being publicly listed as having registered to participate. 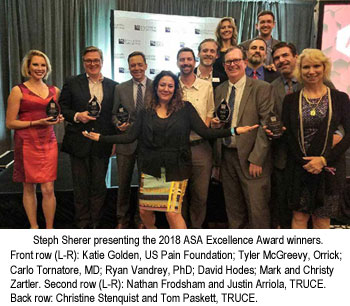 Patient Advocate of the Year:  Jennifer Collins, Virginia – Jenn’s remarkable story and advocacy were featured last month in the ASA Activist Newsletter and is recounted in “The Life She Deserves,” a short documentary from the Brookings Institution.

Elected Official of the Year: West Virginia State Senator Richard Ojeda -- Senator Ojeda, an Army Major (ret.) and combat veteran, led the effort on the West Virginia Medical Cannabis Act (SB386). His role in creating the state’s medical cannabis program was inspired by a desire to do something about the opioid crisis in his state. Currently a candidate for U.S. Congress (3rd District), Senator Ojeda has made access to medical cannabis a significant part of his policy platform.

Chapter, Affiliate, or Action Group of the Year: Together for Responsible Use and Cannabis Education (TRUCE) -- ASA groups and chapters work in states all across the country, but medical cannabis in Utah presents unique challenges due to the state’s politics and influence of the LDS church. TRUCE has made impressive advances despite that, playing a key role in the Utah Patients Coalition that has just qualified a strong medical cannabis voter initiative for the November ballot.

Researcher of the Year: Ryan Vandrey, PhD – Dr. Vandrey’s groundbreaking work on cannabis administration and dosing will help provide a foundation for the development of new cannabis-based medicines. An Associate Professor of Psychiatry and Behavioral Sciences at the Johns Hopkins University School of Medicine in Baltimore, Dr. Vandrey also recently conducted the first series of labeling studies for THC and CBD products, utilizing laboratories enrolled in the Patient Focused Certification program.

Medical Professional of the Year:  Carlo Tornatore, MD -- As Chairman of the Department of Neurology and the Director of the Multiple Sclerosis Center at Georgetown University, Dr. Tornatore has made medical cannabis a priority for his patients. He includes use of medical cannabis in his patient education seminars and has brought it into the mainstream at the Georgetown Multiple Sclerosis and Neuroimmunology Center, one of the largest and most prestigious in the country. 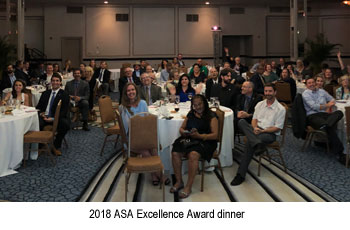 Journalist of the Year: David Hodes -- David has worked both as a contributor and editor of several business and cannabis publications including Cannabis Business Executive. His coverage of the intersection of federal policy with the cannabis industry is invaluable for both the industry and the public. He is member of the National Press Club.

Courage Award: Zartler Family – Mark and Christy Zartler’s struggle to treat their daughter Zara’s severe autism, which produces self-injurious behaviors, with cannabis and keep their family together has been a very public one. Facing down the state of Texas to do what is right for your child defines bravery for medical cannabis advocates.

Veterans deserve equal and safe access to medical cannabis, yet the Veterans Health Administration continues to prohibit its physicians from providing the required paperwork to enroll in state programs.  New legislation would fix that. Tell your Member of Congress to support equal access for all veterans today! It's easy. Just go to: https://safeaccess.us/Veterans-Access.