On May 28, the House of Representatives took an historic step toward protecting medical cannabis patients and the state programs that serve them. By a vote of 219-189, the House approved an amendment that would cut of funds for Department of Justice (DOJ) enforcement in medical marijuana states. One hundred seventy Democrats and 49 Republicans voted in favor of Amendment No. 25, which was sponsored by a bipartisan coalition of six Republicans and six Democrats.

The Commerce, Justice & Science (CJS) appropriations bill is now before the U.S. Senate, where ASA and other advocates are lobbying for a similar amendment to be offered.

"This vote is a huge step forward for patients," said Steph Sherer, ASA Executive Director. "If the Senate approves it, no longer will we have to look over our shoulder and worry when the next raid or indictment will prevent us from safely and legally accessing our medicine."

The historic House vote followed widely circulated news about an ongoing federal prosecution of five patients in Washington State who were growing a modest amount of medical marijuana for their own personal use. The DOJ has been seeking 10-year mandatory minimum to life sentences for each defendant. One of the defendants, Larry Harvey, traveled to Washington, D.C. last month to meet with members of Congress and hold a press conference with some of the sponsors of the CJS Amendment, Reps. Paul Broun (R-GA), Earl Blumenauer (D-OR), and Sam Farr (D-CA), and ASA Executive Director Steph Sherer.

Just weeks before its historic vote on the CJS Amendment, the House came close to lifting the ban on Veterans Affairs doctors writing recommendations for medical cannabis. The bipartisan "Veterans Equal Access Amendment" to the House Military Construction & Veterans Affairs & Related Agencies Appropriations Act (HR 4486) was narrowly defeated by a vote of 195-222. Veterans are entitled to use the Veterans Health Administration for all their medical care, but federal policy currently prohibits VA doctors from recommending cannabis, despite court rulings that such recommendations are protected by the First Amendment. To obtain legal access to medical cannabis in states that allow it, veterans must pay out of pocket to see non-VA doctors.

The full roll call of how each member of the House voted on the CJS and Veterans amendments can be found at  VoteMedicalMarijuana.org.

Americans for Safe Access  is running 30-second TV advertisements on MSNBC in Maryland and South Florida over the next few days targeting Members of Congress who opposed medical marijuana reform in last week's House vote.

The ad running in Maryland focuses on Rep. Andy Harris (R-MD), who spoke out on the House floor against the 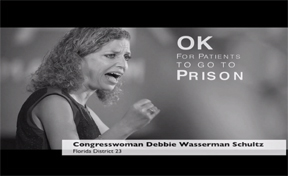 measure that restricts Justice Department funds spent on medical marijuana enforcement in states that have legalized its use. Despite the recent passage of a medical marijuana law in his State of Maryland, Rep. Harris made the claim Friday that "Marijuana is neither safe nor legal."

The political advertisements are part of the "Vote Medical Marijuana" campaign, which includes an interactive online tool (VoteMedicalMarijuana.org) that provides voting statistics and a report card for each Members of Congress. A project of ASA, VoteMedicalMarijuana.org provides details not only on last week's vote, but also on other medical marijuana-related measures like the recent House budget amendment that would have allowed Veterans Affairs physicians to recommend medical marijuana to their patients.

ASA is offering to produce similar advertisements in the other Congressional districts where elected officials voted against the budget amendment to restrict DOJ enforcement in medical marijuana states.

Minnesota has joined 21 other states and the District of Columbia in providing limited legal protections for qualifying medical cannabis patients.  More than 128 million Americans now live in a medical cannabis state.

Governor Mark Dayton signed SF 2470 into law on May 29, creating a medical cannabis program that  will license two manufacturers of medical cannabis oil extracts and eight distribution centers across the state. The Minnesota law differs substantially from the approach taken by most other states. It prohibits any use and possession of the dried, whole-plant flowers, including smoking, which is the method and form most widely used. Only concentrated oil extracts are permitted.

Health care practitioners may recommend marijuana to patients with cancer, multiple sclerosis, HIV/AIDS, chronic pain, seizures, and a range of other medical conditions. The law establishes a patient registry and task force to evaluate health impacts of the program. Registered patients are protected from arrest, prosecution and civil discrimination. The state is to start supplying patients with medical cannabis oil by July 1, 2015.

"Minnesota has taken important action to meet the needs of their medical cannabis patients," said Steph Sherer, ASA’s Executive Director. "We will work to expand this restrictive law to provide access to the types of medicine most patients prefer."

Under the new Minnesota law, possession of small amounts of cannabis plant material is a misdemeanor. Qualified patients registered with the new program who are caught with the plant form of cannabis can be jailed for up to 90 days, fined $1,000 and terminated from the program. Many Minnesota patients who rely on whole-plant cannabis or cannot tolerate highly concentrated oil extracts have said they will continue to violate the law to access the medicine they need.

At least one medical cannabis patient will now have his medicine covered by insurance, thanks to a unanimous ruling from the New Mexico Court of Appeals last month. The ruling upheld a Workers’ Compensation decision that a Santa Fe car mechanic with a lower back injury is entitled to coverage. His former employer and its insurance company had argued that federal law prevented them from paying for medical cannabis.

Gregory Vialpando uses medical cannabis to treat severe chronic pain his doctor describes as some of the worst he has ever seen. After he was injured in 2000, Vialpando was initially prescribed multiple narcotics and anti-depressants, but both his primary care provider and another doctor recommended medical cannabis, so he asked a state workers’ compensation judge to approve it in 2013.

The judge ruled that he was qualified to participate in New Mexico’s medical cannabis program, that it was necessary and appropriate medical treatment, and that he should be reimbursed for the cost of his medical cannabis. His former employer and its insurance company refused. In appealing the decision, they argued that they shouldn’t have to pay, because doing so would violate federal law and public policy.

Writing for the appeals court, Judge James Wechsler pointed out that neither the employer nor the insurance company could name a federal law they would violate by reimbursing Mr. Vialpando for the cost of his medicine.  \

In another first, the state appeals court ruling cited the 2013 Department of Justice memo from Deputy Attorney General Cole in rejecting the argument that reimbursement for the cost of medical cannabis treatment would violate federal public policy. The court noted the DOJ’s intent to defer to state and local authorities and stated that New Mexico public policy is clear.

The court said the Lynn and Erin Compassionate Use Act established a regulated program for the beneficial use of medical cannabis for patients just such as Gregory Vialpando. Participating in that program does not mean he sacrifices his right to reimbursement for care under the Workers Compensation Act; on the contrary, the court affirmed that the New Mexico medical cannabis program is covered by workers’ comp.

A bipartisan group in the House of Representatives has drafted a letter asking the Secretary of Health and Human Services (HHS) to remove a federal barrier that is unique to medical cannabis research.

The PTSD study with veterans approved this spring is only the second one to get past the process in the past decade. HHS and the DEA cite the lack of clinical trials as a reason for maintaining the Schedule I classification of cannabis.

ASA has an online tool to help advocates ask their Representatives to sign on to the letter at AmericansForSafeAccess.org/researchletter.

The amount of cannabis available for federally approved research studies was increased dramatically this spring, according to an April 29 announcement from the Drug Enforcement Administration.

from 21 kg to 650 kg in order to meet current and anticipated research needs. For the past four years, 21 kg is how much NIDA has been allowed to produce at the one federally licensed cannabis cultivation center in the U.S., a 4-acre facility at the University of Mississippi that has been operating since 1968.

The 3000% increase, which the DEA said was needed to meet research demands, was widely reported.  Few research studies of medical cannabis are approved in the U.S., and those that are approved have had difficulty obtaining research cannabis from NIDA, as federal law requires.

One such case is the University of Arizona study of how medical cannabis may help treat veterans with PTSD. In April, that study was approved to receive federal cannabis, after many years of delay. The study’s sponsor took NIDA to court in 2007, asking a DEA judge to approve an additional cultivation license to increase availability. The court’s 87-page ruling noted approved research has been blocked “because NIDA has refused to provide them with marijuana.”  The judge concluded “the existing supply of marijuana is not adequate.”

Of the 21 kg that NIDA has produced annually since 2010, more than half goes to the four patients still enrolled in the Investigational New Drug program. Between them, the four receive 11.6 kg of free cannabis cigarettes from NIDA, leaving little more than 9 kg for all U.S. research studies combined.

Last month, the California legislature advanced one bill to regulate medical cannabis distribution while rejecting another. The Assembly defeated AB 1894, a bill by Tom Ammiano (D-San Francisco) that would have given regulatory authority over medical cannabis distribution to the Department of Alcoholic Beverage Control (ABC). The Senate approved 31-0 SB 1262 by Lou Correa (D-Santa Ana) that would place oversight in the Department of Consumer Affairs (DCA). Provisions restricting doctors who recommend medical cannabis were removed prior to passage.

The Senate bill now goes to the Assembly, where it will be heard in Assembly Member Ammiano’s public safety committee. The California Police Chiefs Association and the League of California Cities both support SB 1262, as does Americans for Safe Access, though ASA is asking for additional changes.

SB 1262 does not stop cities and counties from banning dispensaries or provide incentives for regulating them. ASA is urging the Assembly to add sliding scale fees for smaller commercial cultivators and providers and to include language that covers cooperatives and collectives in cities that allow but do not specifically “authorize” medical cannabis activity.

Join ASA in Sacramento on Friday, August 8 to lobby state elected officials on behalf of patients. Find out more online at SafeAccessNow.org/ca_citizen_lobby_day.

We’re close to an historic win in Congress, but we need your help today. The Senate must approve an amendment like the one the House passed last week to stop federal interference with state medical cannabis programs. We’re lobbying hard on Capitol Hill, but your Senators need to hear from you today! Urge them to support a Senate version of the bipartisan Rohrabacher-Farr Amendment to the Commerce, Science, and Justice (CJS) Appropriations bill for fiscal year 2015.

To download a PDF of this newsletter to print and distribute, go to AmericansForSafeAccess.org/june2014_newsletter.