With the Food and Drug Administration (FDA) dragging its feet on issuing rules for hemp-extract production, a bipartisan group of three Democrats and three Republicans are cosponsoring a bill that would regulate cannabidiol(CBD) as a dietary supplement. Currently, the only CBD product that can be legally marketed is the pharmaceutical drug EpidiolexTM, which has been approved only for use with children who have rare seizure disorders. The FDA has sent letters to several retailers of CBD products, telling them to stop making health-related claims.

The 2018 Farm Bill cleared the way for a national, interstate market in hemp and hemp-derived products, and the U.S. Department of Agriculture (USDA) has approved several hemp cultivation programs. Last month, the USDA approved Texas, Nebraska and Delaware, as well as four tribes: the Yurok Tribe, Colorado River Indian Tribes, the Fort Belknap Indian Community, and the Iowa Tribe of Kansas and Nebraska. Louisiana, New Jersey, and Ohio have previously received USDA approval for hemp cultivation, as have the Flandreau Santee Sioux, Santa Rosa Cahuilla, and La Jolla Band of Luiseno Indian Tribes.

Farmers who want to legally grow hemp must do so in a USDA-approved jurisdiction or apply for a USDA license directly. The USDA website indicates that 16 state and 10 tribal plans are currently under review. Many other states and tribes are drafting plans, and three states are operating under the 2014 Farm Bill’s pilot program.

No CBD for Service Members

While the 2018 Farm Bill made hemp and its extracts legal in the U.S., Department of Defense maintains a “zero-tolerance” policy on all cannabis products, including CBD. Each branch of the armed services has issued separate guidance on hemp products.

On January 15, Congress held hearings on six pending cannabis bills in a key House subcommittee. The Energy and Commerce Subcommittee on Health called federal agency officials to testify on “Cannabis Policies for the New Decade” as the committee considers the Marijuana Opportunity Reinvestment and Expungement (MORE) Act, the Marijuana Freedom and Opportunity Act, the Medical Cannabis Research Act of 2019, the Medical Marijuana Research Act of 2019, the Legitimate Use of Medicinal Marijuana Act and the Veterans Medical Marijuana Safe Harbor Act.

Medical research on cannabis was the focus of the hearing, with officials from the Drug Enforcement Administration (DEA), Food and Drug Administration (FDA) and National Institute on Drug Abuse (NIDA) identifying bureaucratic barriers to more studies. The officials all acknowledged the problems with the supply and types of cannabis researchers are required to use in clinical studies, all of which must be obtained from the NIDA farm at University of Mississippi.

Voters in Mississippi and South Dakota will have medical cannabis initiatives on their ballots in November.

The Mississippi Secretary of State’s office announced last month that it had certified the petition signatures for Ballot Initiative 65, which would amend the state’s constitution to allow qualified patients to use medical cannabis and to designate a caregiver to assist them.

To qualify for the ballot, the state requires signatures from at least 86,000 registered voters. In September, Mississippians for Compassionate Care submitted more than 105,000 signatures. The group says polling shows 77% of voters in the state support medical access.

If enacted, physicians would be allowed to certify patients for a broad range of conditions, including pain, nausea, PTSD, multiple sclerosis, Parkinson’s disease, ALS, and sickle-cell anemia. The state department of health would be responsible for developing rules for the operation of licensed dispensaries, but the initiative specifies a purchase limit of no more than 2.5 ounces in a two-week period.

The initiative is opposed by Mississippi Gov. Phil Bryant (R) and the state Board of Health.

In South Dakota, the secretary of state’s office certified that activists there had turned in petitions with enough valid signatures to make the November ballot as Initiated Measure 26. The medical cannabis initiative there is a statutory amendment, which requires just under 17,000 signatures. Activists with New Approach South Dakota submitted more than 30,000.

If approved by voters, the medical cannabis program would allow home cultivation for qualified patients and caregivers of three plants, or more if certified by a physician. Enrolled patients would also be able to obtain up to three ounces of cannabis from licensed dispensaries. The initiative is likely to face opposition from Republican lawmakers in the state. The state Republican party campaigned on social media against the petition effort, and South Dakota Gov. Kristi Noem (R) has already vetoed a hemp legalization bill.

Americans for Safe Access has announced the agenda for the 2020 National Medical Cannabis Unity Conference and Lobby Day, to be held in Washington, D.C. March 25-28. The conference theme is "Campaigning for Cannabis: Making Policies Work for Patients." 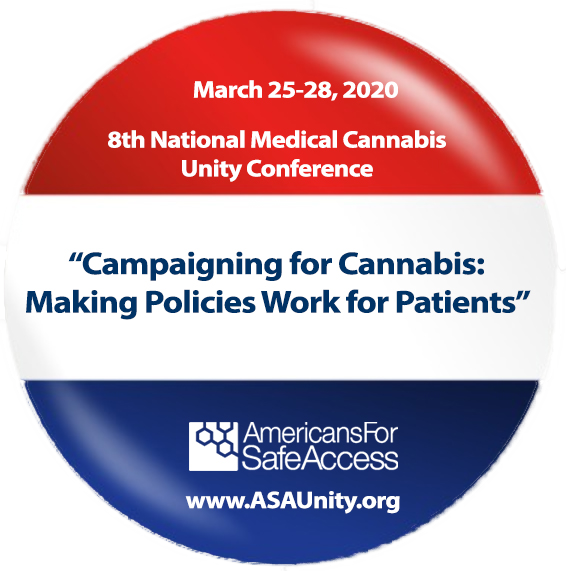 On Wednesday, March 25, there will be a welcome reception in the evening following afternoon workshops. The pre-conference workshops are open to everyone, free to Unity registrants and a small fee for those that are not attending Unity. This year, there will be workshops focused on veteran issues and one focused on competitive athletes. There will also be a cooking workshop,  a training on advocacy and one on chapter building.

Thursday, March 26 is Lobby Day, which will include a training on citizen lobbying in the morning before participants travel to capitol hill for a press conference and meetings with elected representatives and staffers. ASA will schedule lobby meetings for all registered participants, and activists who are unable to attend in person will have the opportunity to take action online.

Informative panels and networking opportunities fill the day for Friday, March 27. Panels will consider the impact on patients of transitions between regulatory approaches, the effects of international developments on U.S. policy, and the importance of research for product safety. Following that, attendees will break out into stakeholder groups for discussion and networking. The day wraps up with a VIP reception and awards dinner, where ASA will recognize outstanding contributions to safe access.

On the last day of the conference, Saturday, March 28, ASA will offer a Cannabis Care Certification training and a compliance training specific to operating in the District of Columbia.

On March 3, ASA will be presenting on a panel at the 2020 Natural Products ExpoWest conference. Heather Despres, director of ASA’s Patient Focused Certification program, will be on a panel that is part of a day-long summit on hemp and CBD. ExpoWest is being held in Anaheim, California, from March 3 to 7.

Connor Sheffield will be on the start line opening day at the Airport Speedway in Delaware on April 4. At 15, Connor isn’t old enough to have a driver’s license, but he finished 7th overall in the local micro-sprint kart race series. “Without racing, who would I be?” Connor wrote at the end of 2019.

Without medical cannabis, likely not even alive.

Afflicted from a very young age by digestive and eating problems, Connor was finally diagnosed at age 11 with pediatric gastro-intestinal dysmotility, a rare autoimmune disorder that had him in and out of hospitals for much of his young life. Connor’s slow GI system results in pseudo-obstructions of his bowels and other painful, life-threatening problems.

In 2018, after years on a feeding tube, he spent a month in the hospital where he was fed through his veins for 20 days. His doctors at Johns Hopkins had given up hope and suggested to his family that there was nothing left to try. It was time for palliative care.

That’s when a family friend urged the Sheffields to consider cannabis. They’d exhausted their options, including many types of alternative medicine, but they remained deeply skeptical of cannabis.

“We didn’t think it would work,” Connor says. On December 27, 2018, they tried it anyway, administering a medicinal cannabis tincture containing 15mg of THC.

Over the next month, Connor’s parents continued the cannabis treatment and carefully monitored and recorded his daily progress, documenting weight gains from the mere 76 pounds he’d dropped to during his month in the hospital. But they kept it secret from everyone out of fear of arrest or loss of custody to Child Protective Services.

When on their next visit his doctor said “Wow, Connor, you look amazing,” and began to pat himself on the back for Connor’s recovery, his mother, Tricia, knew it was time to tell him what had actually made the difference.

“His doctor was like, ‘Really?!’” Trica recalls. “He said he couldn’t sign off on it, but keep doing what you’re doing.”

Where the family got the most resistance was from Connor’s psychologist, who tried to talk them out of using cannabis to treat him.

“She was concerned about how it might affect his developing brain, but she’s a believer now.”

She was not the only to be persuaded by Connor’s experience. The dramatic improvements were undeniable to everyone who had been following his journey, of which there were many.

After missing on average 150 out of 180 days of school over the previous five years, in 2019, Connor was able to return to school full time. In this, his sophomore year in high school, he’s only missed 12. What makes that possible is the regimen of cannabis tincture, which he needs every four hours in microdoses.

Unfortunately, Maryland prohibits cannabis on school grounds for any reason, so he can’t go to the school nurse’s office to take his medicine the way he could if he had been prescribed steroids, Ritalin, or even an opioid narcotic. A parent has to come to school, sign him out, and take him completely off school grounds to give him the medicine that’s not just keeping him alive but helping him thrive. That’s possible some days, but there are others when his parents have to travel for work, and Connor has to skip his medicine.

Connor’s family is not alone in confronting this grave dilemma. Maryland currently has nearly 200 school-age children enrolled in its medical cannabis program, but none of them can take their medicine at school.

On January 20, 2020, a bill to fix that was introduced in the Maryland House of Delegates. If enacted, HB 331 and companion Senate Bill 0605, also known as Connor’s Courage, would remove that barrier for the state’s sick children. 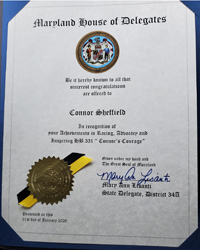 When interviewed for this article, Connor was again at the Maryland statehouse, lobbying for the bills.

“I’m a living example that this works,” Connor says. “If I want to see this passed, they have to see me. I have to express the issue.”

Connor notes that there are currently only 11 states that allow school children to use the medicinal cannabis they’re legally entitled to on school grounds. Neighboring Washington, D.C. just added the provision, as has Virginia. The Sheffields are hopeful Maryland will join them this year.

“Being a public advocate is a little stressful,” Connor admits, but says that once people know the facts, “nobody is really going to oppose it.”

As many other patients also report, Connor says his microdoses of cannabis do not leave him feeling high, just out of pain. Tricia says cannabis has transformed her son’s life, not just helping him eat and digest food but allowing him to grow more confident and social. And in the last year using cannabis, he’s grown a foot in height. Connor finally had his feeding tube removed last month, and is excited to get back to racing.

With the presidential election in full swing, advocates at ASA’s 2020 National Medical Cannabis Unity Conference and lobby day have a chance to push or elected officials to improve and expand safe access. If you can make it to Washington D.C. in March to experience ASA conference and lobby day, you'll meet other advocates, learn together and meet with your lawmakers and staff.

If you can’t make it to D.C., you can still participate by lobbying from home. ASA will coordinate your efforts by email and on the phone so we can expand our impact even further.

Just RSVP to receive notification on March 26 about how to work with us in contacting your elected officials. RSVP today at safeaccessnow.org/lobby20.