More than 103,000 people have signed ASA’s petition on Change.org demanding the government stop spreading false information about medical cannabis. The petition supports a legal action filed by ASA on behalf of patients that would force the Drug Enforcement Administration to ensure that all of the information they distribute on medical cannabis reflects scientifically accurate, up-to-date facts, including removing all references to the "gateway theory" and other scientifically disproven claims. 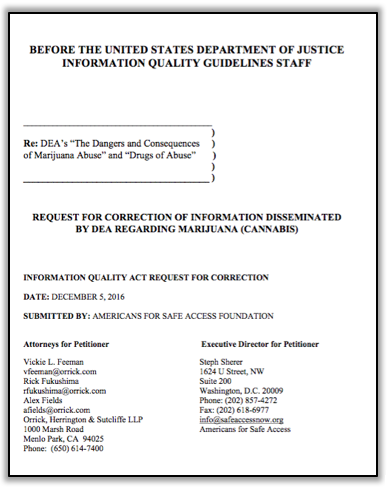 On January 17, ASA staff delivered to the White House Office of National Drug Control Policy the signatures that had been collected at that point in a last-ditch effort to get President Obama to take action before he left office. More than 98,000 had signed then, and with 5,000 additional signatures and the petition collecting more every day, ASA will now be pressuring the new administration to correct the errors.

ASA’s legal filing cites 25 violations under the Information Quality Act, alleging that the DEA website currently contains not just inaccurate statements but ones that have been refuted by the DEA itself in its “Denial of Petition to Initiate Proceedings to Reschedule Marijuana,” issued August 12, 2016.

“The DEA has conceded in response to petitions that cannabis is not a gateway drug and does not cause long-term brain damage or psychosis, yet they continue to make those very claims to the public,” said Beth Collins, ASA’s Senior Director of Government Relations and External Affairs. “This means that our elected officials are legislating on behalf of millions of medical cannabis patients using false information."

Advocates will also have a chance to lobby Members of Congress directly by joining ASA's 2017 Medical Cannabis Unity Conference in Washington, DC, April 7-11, 2017.

A new, comprehensive review by the National Academies of Sciences, Engineering, and Medicine of the last 15 years of research finds “conclusive evidence” that cannabis is effective in treating chronic pain, nausea and multiple sclerosis.

The review of 10,000 medical cannabis studies conducted since 1999 also found substantial scientific evidence for other therapeutic benefits, but the committee concluded that many questions could not be answered because of a lack of available research.

The authors noted that the lack of evidence in many areas was the most surprising finding and recommended more research. Among the barriers to that research the committee identified are the classification of cannabis as a Schedule I substance and the difficulty researchers have in obtaining “the quantity, quality, and type of cannabis product necessary to address specific research questions.” They also noted the need for a more diverse network of funders to support research.

The Department of Public Health and Social Services for the U.S. territory of Guam began accepting license applications last month for dispensaries, cultivators, processors and testing labs. Guam Public Health Director James Gillian said there were 40 applicants by 2pm on the first day, and patients could have access to medical cannabis by this summer.

Public Health also announced that before successful applicants can begin operating, they will be required to enroll in ASA’s Patient Focused Certification (PFC) program.

"What we're saying is, people who are applying for licenses and permits, we encourage you highly to get a certification from the patient focused folks," Gillan told KUAM News.

PFC has been conducting trainings across the country, with many such as this month’s webinar with A2LA on cannabis testing available online. PFC is also offering in-person Dispensary Staff trainings every week at ASA headquarters in Washington, DC.

Officials tasked with writing the regulations for Ohio’s new medical cannabis program, authorized by the legislature last June, are inviting comment on proposed rules for processors and patients. Interested parties may weigh in until Feb. 10. Rules must be adopted by September.

Included in the proposed regulations from the Ohio Medical Marijuana Advisory Committee is a $50 fee for patients and a $15 fee for caregivers for registering with the Ohio Board of Pharmacy. Veterans and the indigent would get a 50% discount. Caregivers would have to be 21 or older and could only serve up to two patients. Minor patients would be required to designate a parent or guardian as their caregiver. The terminally ill would receive expedited 10-day processing of registrations.

The state’s proposed rules for processors cover facility design, employee training, analytical testing and inspections, and safety issues. Ohio will issue up to 40 licenses for medical cannabis processors, with an application fee of $100,000, plus a $90,000 fee for receiving a certificate of operation and an annual renewal cost of $100,000.

More than 70% of Florida voters approved in November a far more robust medical cannabis program than the one created by state lawmakers, but the rules state officials are proposing ignore the voters’ intent.

The Florida Department of Health's first draft of rules would restrict patient access and allow only a limited expansion of Florida's existing program. The constitutional amendment passed by voters states that patients may qualify for any “debilitating medical condition … for which a physician believes that the medical use of marijuana would likely outweigh the potential health risks.” Yet the proposed rules would only authorize use for patients with specified conditions. The rules would allow new conditions to be approved by the state Board of Medicine, but the amendment does not grant any decision-making power to the Board of Medicine.

The proposed rules would also restrict production and distribution to the seven companies currently authorized to grow and sell cannabis for the entire Florida market. This "vertical integration" model means there is little to no competition in the state. Lawmakers are considering a proposal to split that into four separate licenses — cultivation, processing, transportation and retail.

On Feb. 1, the Hawaii Department of Health gave two medical cannabis dispensaries the okay to start cultivating. The dispensaries on Maui and Oahu are the state’s first to ramp up operations under an expanded medical cannabis program approved in 2015. Eight dispensary licenses were awarded in 2016, with each license allowing two production facilities of up to 3,000 plants each and two retail locations. Two other licensees are expected to begin cultivation soon, with a target of July for serving the more than 15,000 patients currently registered with the state, which has a population of 1.4 million. No medical cannabis products can be sold until an analytic laboratory is licensed to test the products, but the Department of Health is reviewing two lab applications and accepting more. In 2000, Hawaii became the first state to enact a medical cannabis law through legislative action, but it only allowed home cultivation.

A New Jersey man injured on the job is entitled to have his medical cannabis paid for by workers compensation, a judge ordered in December. Andrew Watson suffered a serious hand injury working for a lumber company in 2014 and qualified for the state’s medical cannabis program as a result. His suit claimed that he had experienced relief from using the medical cannabis he purchased through the program but his employer refused to pay for it, so he discontinued use. At roughly $500 per ounce, New Jersey’s medical cannabis is the most expensive in the nation.

In the first decision of its kind in New Jersey, Administrative Law Judge Ingrid L. French ruled, "the effects of the marijuana, in many ways, is not as debilitating as the effects of the Percocet…. As a result of his improved pain management, he has achieved a greater level of functionality." The judge concluded by noting "While the court is sensitive to the controversy surrounding the medicinal use of marijuana, whether or not it should be prescribed for a patient in a state where it is legal to prescribe it is a medical decision that is within the boundaries of the laws in the state."

A previous case in New Mexico resulted in a patient’s medical cannabis costs being covered by workers compensation insurance.

On January 20, the German parliament unanimously passed a medical cannabis law. Physicians will be allowed to prescribe cannabis for multiple sclerosis and other severe conditions such as chronic pain and nausea, according to the Federal Ministry of Health. The new law, first approved by the cabinet in May 2016, goes into effect in March. Eventually, medical cannabis will be cultivated through a new state-regulated program, but the medicine may be imported until then.

ASA’s 2015 Activist of the Year, Terrie Best, says she has always sympathized with the victims of the drug war. Her direct action on their behalf began in San Diego with work on a needle exchange program in 2003. Five years later, after seeing firsthand the remarkable benefits medical cannabis can have for patients, Terrie began doing court support for the individuals who were caught up in long series of raids on San Diego’s medical cannabis dispensaries. Her social media reporting on the trials of Eugene Davidovich, Jovan Jackson and others helped galvanize supporters and educate the community, with jurors in two trials returning “not guilty” verdicts in a mere 10 minutes. The work of San Diego ASA, which Terrie now leads, has helped change the politics of the issue, as well. The district attorney who pushed prosecutions of medical cannabis providers is leaving office, and San Diego city officials are moving toward a regulated approach to medical cannabis. 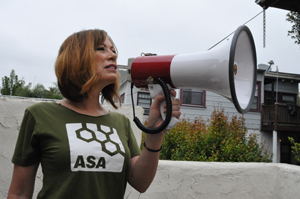 Best’s advocacy for medical cannabis patients stems directly from what she has learned from them. Her interest began with cannabis’s potential for treating anxiety disorders and PTSD but quickly expanded as she was exposed to more patients, such as a woman she met in 2008 who uses a topical preparation to treat nerve pain in her cheek and mouth, and Jacqueline Patterson, a mother from Missouri whose youtube videos about how cannabis controls her severe stutter and other symptoms of cerebral palsy have been viewed millions of times.

“Social justice issues was what got me started,” says Terrie. “California voters had acted in 1996, but patients were still being forced into court. Our police and prosecutors were not honoring the will of the people. There was no mercy. That was a travesty.”

Once she started work on the issue, it became apparent to her that the real victims were people of color in the community.

“Black and brown folks don’t get the same response from law enforcement when they identify themselves as patients,” says Terrie. She found non-white defendants were more likely to plead guilty because of a lack of community support.

Her court support work with other members of San Diego ASA has made a difference. They have helped arrange testimony form expert witnesses such as Dr. Michelle Sexton, a naturopath and expert on botanical medicines and Andrew Pham, former lead scientist at SC Labs. Using legal resources from the ASA website, they’ve helped win acquittals. Now, attorneys will call or have their clients call.

“The climate has changed in San Diego,” Terrie says. “The city council is not banning ancillary medical cannabis businesses like labs, so we’re looking forward to getting ordinances to regulate those.”

The key to success, she says, is keeping the pressure on and making it public.

“Engaging your elected officials on twitter and facebook, calling them out for their votes in public – that works,” she says. “You have to be respectful, but it is fun to make fun of law enforcement. If there's a raid, I just really like heckling the DEA with a bullhorn.”

Effective advocacy is more important than ever. Register today for ASA’s fifth annual National Medical Cannabis Unity Conference to gain strategic tools, network with other advocates, and lobby your Congressional representatives. This year’s focus on “The Role of Medical Cannabis in Modern Medicine” will equip participants to be successful advocates. Held April 7-11 at the Lowes Madison Hotel in Washington, D.C., the conference will also mark ASA’s 15th anniversary with a special celebration. Register today to qualify for special early bird rates. http://www.nationalmedicalcannabisunityconference.org