Veterans will be able to discuss medical cannabis as a treatment option with their doctors in the Veterans Health Administration (VHA) if a new bipartisan bill is approved in Congress. Currently, federal policy prohibits VHA doctors from discussing medical cannabis with their patients, despite federal court rulings that such discussions are protected by the First Amendment.

At the end of November, Representatives Earl Blumenauer (D-OR) and Dana Rohrabacher (R-CA), along with five Republican and five Democrat House cosponsors, introduced the Veterans Equal Access Act. If adopted, the bill would allow VHA physicians to recommend medical cannabis to their patients.

"Post traumatic stress and traumatic brain injury are just as damaging and harmful as any injuries that are visible from the outside, sometimes even more so because of the devastating effect they can have on a veteran's family, " said Rep. Blumenauer, the bill's author. "We should be allowing these wounded warriors access to the medicine that will help them survive and thrive, including medical marijuana, not treating them like criminals and forcing them into the shadows. It's shameful."

Many veterans report that cannabis can help with PTSD. Inhaled cannabis reduced PTSD symptoms by an average of 75% in one clinical study whose results were published this spring. A study of using cannabis to help treat PTSD in veterans has been approved by the federal government, pending funding. Medical cannabis has also been shown effective for many patients living with other serious medical conditions that disproportionately affect veterans, including cancer, neurological disorders, multiple sclerosis, and chronic pain.

"Our combat veterans are far more likely to suffer from PTSD and chronic pain than other Americans, and their VHA doctors know better than most how difficult those conditions can be to treat with conventional medications," said Mike Liszewski, ASA Government Affairs Director. "Veterans deserve the same rights and health care options granted other Americans, especially where medical cannabis is concerned."

In 2011, the VHA issued a directive that allows veterans who use medical cannabis as part of an approved state program to remain under VHA pain management care. But the policy also prohibits VHA doctors from providing the recommendations that those state programs require for participation.

For many veterans, the VHA system provides all their health care. With more than a million U.S. veterans at risk of homelessness due to poverty, many do not have the ability to pay for private physicians in order to meet their health care needs.

More than half a million veterans who served in Iraq and Afghanistan suffer from PTSD and depression, with those conditions contributing to a suicide rate among veterans of 22 per day. Almost a million veterans suffer from pain that requires opiate narcotics to treat, with more than half of those needing to take those dangerous drugs for more than 90 days. The fatal overdose rate among veterans is nearly double the national average, but states that have enacted medical cannabis programs have seen drops in fatal opiate overdoses of 20-30 percent, as well as decreases in suicide rates of 5 percent.

States that enacted medical cannabis laws recently -- Minnesota, New Hampshire and Illinois -- are in the licensing phase for businesses that will serve patients, while several with delayed programs – Massachusetts, New Jersey, Maryland and Rhode Island -- are also moving forward to serve patients. Meanwhile, Connecticut officials are considering expanding their program.

Minnesota has announced the two companies selected to produce medical cannabis medicines under the law passed in May that created a restrictive medical cannabis program. The two were selected from a pool of 12 applicants, each of which paid $20,000 to apply. The Minnesota producers will both cultivate medical cannabis and process it into pill or liquid form for distribution to qualified patients. Eight distribution sites are scheduled to be operational by the end of 2015.

Local officials in New Hampshire are considering applicants for medical cannabis business licenses. A proposal for a cultivation facility and dispensary in Epping is before local authorities and, if approved, could open to patients within a year. New Hampshire will license up to four nonprofit medical cannabis facilities.

In Illinois, Chicago's Zoning Board of Appeals last month approved a proposal for the city’s one cultivation center and six of 13 dispensaries that are permitted under  the medical-marijuana law passed last year. The centralized cultivation center is expected to produce 4,500 pounds of medical cannabis annually and will manufacture topical and edible medicines. The board rejected one dispensary applicant for having lax security proposals.

Massachusetts state health officials had predicted dispensaries would be open this past summer, but are still in the approval process. Last month, they approved Boston’s first medical cannabis dispensary, as well as locations in Brookline, Northampton, Fairhaven and Taunton. So far, Massachusetts has conditionally approved 15 applicants, subject to inspection and local zoning approval. No dispensaries have yet been selected for four counties. The head of the state program said they “expect the first dispensaries to open later this winter.”

New Jersey officials, who have been criticized for slow implementation of the law, granted a permit to the state’s fourth medical cannabis dispensary after a 3-1/2 year application and vetting process. It will be at least another six months for cultivating and testing before sales begin. The first dispensary in New Jersey opened in December 2012. Preliminary approvals for six nonprofits were issued in March 2011.

Maryland’s medical cannabis program commission, after two years of delays, approved draft regulations for cultivation and distribution businesses. The commission has not yet set rules for the sale of edible products but okayed distribution of other products and set two-year license fees of $125,000 for growers and $40,000 for dispensaries. Medical cannabis is still not expected to be available to patients until 2016.

The last of Rhode Island’s three slated medical cannabis dispensaries opened last month in Warwick, joining facilities in Portsmouth and Providence. The new dispensary has 25 patients registered and another 50 in the approval process.

In Connecticut, a state panel of doctors heard why the newly launched medical cannabis program should be expanded to include more medical conditions. Patients living with psoriasis, Tourette’s and sickle-cell disease were joined by doctors and health care advocates to explain why medical cannabis would be appropriate for treating those conditions. The board is accepting petitions until December 12 and will make a decision in mid-January. Any recommendations they make will go to the state’s commissioner of consumer protection, who will draft any new regulations for the General Assembly's regulation-review committee. Currently, about 3,000 patients are registered in Connecticut to receive medical cannabis from six dispensaries that began serving patients in late September. 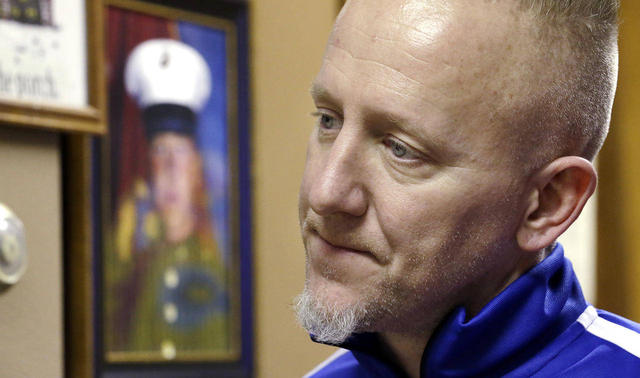 Patrick Seifert, a Marine Corps veteran, is founder of Rainier Xpress, a medical cannabis collective in Olympia, Washington that serves approximately 5,000 patients. He is an active ASA member and serves on the steering committee of ASA-Washington. Patrick is a fierce champion for patients’ rights at the state Capitol, lobbying elected officials and speaking at hearings to educate policymakers.

After a four-year tour of duty during the first Gulf War, Patrick started a security and self-defense training business. He was supplementing the treatment he received at the VA for Post Traumatic Stress Disorder (PTSD) with medical cannabis and slowly became aware of how medical cannabis helped other patients with other conditions. After a few years of going to the local medical cannabis markets and seeing sick and dying patients for whom cannabis was “truly making a difference,” he and his wife committed to saving money to open a dispensary.

Every time veterans visit, they leave with some free medicine, and Patrick helps homeless veterans get registered with the state program. He says he gives away more than $5,000 worth of medicine a month to veterans ranging from a WWII combat photographer to soldiers who served in Iraq and Afghanistan. Ranier Xpress has a wall of honor with pictures of veterans who are patients there from when they were in active service.

“Once we got the shop up and running, every single day I was seeing patients walking out in tears. That made me want to get the word out even more,” he says. “I started showing up at the Capitol at the last session, meeting with senators, other policy makers. Just about every hearing, I spoke at.”

That is where he met Kari Boiter, who has been leading ASA’s Washington efforts, and decided to attend ASA’s National Unity Conference in Washington, DC last March. Patrick says the people he met there inspired him to get even more involved, and as soon as he got back to Olympia he “got the wheels rolling for the Washington ASA chapter.” He also helped start the Washington Cannabis Commission, which is working to craft better legislation for the state.

Patrick is working hard to protect patient access alongside the new recreational model created by I-502. The first two bills proposed this session, which he fought against, would have prevented him from serving patients.

“What I do is provide medicine,” he says. “I’m not going to be just a guy who sells weed.”

You can read Patrick’s Veterans’ Day blog on ASA’s website at: http://www.safeaccessnow.org/for_myself_and_other_veterans_medical_marijuana_is_the_difference 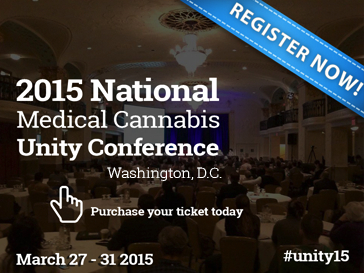 ASA is offering a special promotion for early registration for the third annual National Unity conference March 27-31, 2015, in Washington, DC. Register before December 31 and you will receive a FREE ASA Vape Pen, as well as early bird registration prices.

The tentative agenda for the conference is up on the website, as well as scholarship applications.

You can also save money by booking your room now at the Lowes Madison Hotel in the heart of DC. Be sure to tell them you’re with ASA’s National Medical Cannabis Unity Conference 2015 when you make your reservation.

More info can be found on www.nationalmedicalcannabisunityconference.org.

Download a PDF of this newsletter to print and distribute