Single-day passes to the conference are available on site.

A welcome from ASA Executive Director Steph Sherer was followed by a keynote address from South Carolina State Senator Tom Davis, a leading advocate for safe access to quality medical cannabis in his home state.

Saturday morning conference sessions covered challenges and developments in cannabis research and access, followed by a look at the status of state medical cannabis programs. Late afternoon sessions addressed ASA tools for advocacy and how to change hearts and minds on this issue.

On Monday, attendees have a selection of workshops to pick from, including a series on best practices and regulatory compliance, a series on advocacy and activism covering methods and strategies, and a half-day morning session for medical professionals from Cannabis Care Certification.  A VIP Reception begins Monday night’s festivities, followed by ASA’s annual awards dinner.

Tuesday, patients and advocates will travel to Capitol Hill for an 11:30am press conference before fanning out to do citizen lobbying at congressional offices.

More information about ASA’s conference is at http://www.nationalmedicalcannabisunityconference.org/.

West Virginia Gov. Jim Justice is expected to sign the medical cannabis bill the state legislature sent him Thursday, April 6. The measure, Senate Bill 386, known as the West Virginia Medical Cannabis Act, bounced back and forth between the Senate and House of Delegates, getting amended at each step, until what emerged was far more restrictive than the original bill.

As passed, the bill, which goes into effect July 2018, puts the state Department of Health and Human Resources’ Bureau of Public Health in charge of regulating the program. Physicians who register with the program will be able to recommend cannabis to patients with serious medical conditions ranging from seizures to muscle spasms. Those patients will then register with the state to get access to medical cannabis products through licensed dispensaries.

Home cultivation will not be allowed, and smoking is banned but vaporization and other methods are permitted. Businesses will face substantial fees to operate and can be banned by counties.

The bill was sponsored by Sen. Richard Ojeda, D-Logan, a veteran who served in Iraq and Afghanistan.

Virginia’s current law, passed in 2015, provide only an affirmative defense for possession of the cannabis extracts. The new bill, which passed unanimously out of the House and Senate, tasks the state Board of Pharmacy with licensing “pharmaceutical processors” to “manufacture and provide cannabidiol oil and THC-A oil.” Licensing will take at least a year.

Only patients with intractable epilepsy qualify in Virginia. Other proposed bills which would have expanded the qualifying conditions were rejected, but several state lawmakers have expressed interest in sponsoring new legislation to expand the program’s reach.

“The parents of children with intractable epilepsy worked tirelessly for the past three years to pass this legislation,” said ASA Governmental Affairs Director Beth Collins. “A similar effort including patients with other conditions, doctors, law enforcement and legislators will be needed to pass a comprehensive bill in the Commonwealth in 2018.”

A pair of differing measures that would allow the treatment of epilepsy with cannabidiol extracts, commonly known as CBD oil, passed both chambers in the Indiana legislature on April 6.

The House passed an amended version of Senate Bill 15 unanimously 95-0, and the Senate approved House Bill 1148 later the same day on a vote of 35-13. The original Senate and House bills passed their respective chambers in February.

Prior attempts to pass similar measures met strong resistance. Testifying in support during hearings on the bills were many parents of children with intractable epilepsy.

The two bills are now before a conference committee to reconcile differences such as the percentages of various cannabinoids that medical products will be allowed to have in the state and details of the creation of a state registry.

As the new administration embarks on a review of criminal justice policies that affect medical cannabis patients, elected officials are urging restraint. Governors representing the four states that were the first to legalize all adult use of cannabis sent an open letter April 3 to Attorney General Jeff Sessions and Treasury Secretary Steve Mnuchin asking them to talk to the states before making any policy changes. The letter was signed by Gov. Bill Walker of Alaska, Gov. John Hickenlooper of Colorado, Gov. Kate Brown of Oregon and Gov. Jay Inslee of Washington.

In an April 5 memo to the U.S. attorneys, the Attorney General announced the formation of a DOJ Task Force on Crime Reduction and Public Safety. The task force will “undertake a review of existing policies in the areas of charging, sentencing and marijuana to ensure consistency with the department’s overall strategy on reducing violent crime and with Administration goals and priorities.”

Sessions, long a critic of medical cannabis programs, since becoming Attorney General has repeatedly expressed concerns about marijuana policy, criticizing the Obama Administration approach, alleging a link between marijuana and violent crime, and casting doubt on the medical efficacy of cannabis.

While the Attorney General acknowledged in March that the federal government cannot “take over everything the local police used to do in a state that’s legalized it,” he has said federal marijuana law will be enforced “in states where they may have repealed their own anti-marijuana laws.”

Meanwhile, Rep. Jared Polis (D, CO) and Sen. Ron Wyden (D, OR) reintroduced the Regulate Marijuana Like Alcohol Act in the House and Senate, respectively. The bill would remove marijuana from the Controlled Substances Act and allow state marijuana programs to operate but ban interstate commerce.

The Oregon Liquor Control Commission has issued a recall for a batch of cannabis sold at a retailer east of Eugene. The commission directed people who bought the cannabis to return it to the retailer or dispose of it. The retailer reported 31 customers were affected.

Testing revealed that the Blue Magoo cannabis contained excessive levels of pyrethrins, organic chemicals derived from chrysanthemums that are toxic to insects. Pyrethrins can be used on organic products but only in lower concentrations.

Federal pesticide regulations do not apply to cannabis because of federal prohibition, so states have established their own. Oregon certifies analytic laboratories and mandates cannabis products be tested for 59 chemicals.

Nichole Snow first started learning about cannabis in 2008, after Massachusetts voters decriminalized cannabis, and it became safer to talk about over the watercooler at work. As she heard more about it, she thought about her grandfather. She’d lived with him with him before his death from bladder cancer in 2000, and she wondered if cannabis could have helped him.  Since cannabis is often used as an adjunct therapy in cancer treatment, she did not understand why doctors in Massachusetts had not been able to recommend it for him.

When she noticed a state legislative hearing on medical cannabis was being held near her work, she went. She met caregivers, parents and advocates and heard the stories of patients with dire need for access to medical cannabis. What she learned at that hearing grabbed her attention. The more she learned, the more drawn into the process of changing the law she became.

She made a point to be at all the hearings on medical cannabis she could. Soon, patients started calling her, asking for help coordinating lobbying efforts. The state’s voters approved Question 3 with more than 63% in favor, but Massachusetts, like many states, has struggled to move from passing a law to getting medicine in the hands of patients. Nichole’s tireless work on implementation under the administration of Gov. Deval Patrick.

Nichole’s work with the Massachusetts Patient Advocacy Alliance began in 2014. After serving as deputy director, she became executive director of the organization in 2015 and is still traveling the state working on implementation. She has also emerged as a go-to spokesperson for Massachusetts patients, with dozens of stories quoting her in the Boston Globe alone. As she developed an ever-more effective relationship with media, she came to realize what an agent for change she could be.

The state started with 20 dispensary licenses to be issued in 2013, which was then reduced to 17 and delayed. When the administration changed in 2015 to Gov. Charlie Baker (R), implementation improved.  Currently, 10 dispensaries are serving patients in the state but Nichole reports that 105 provisional licenses are in the pipeline. From approximately 150 registered patients in 2014, the Massachusetts state program has expanded to 39,800 registered patients as of this February. Registered patients may obtain up to 10 ounces every two months and cultivate a limited number of plants at home.

“How far we’ve come is exciting,” Nichole says. “We’re focused on keeping the momentum going in Massachusetts.”Nichole is to be honored as Patient Advocate of the Year at ASA’s annual award dinner on Monday night in Washington, D.C. at the Omni Shoreham.

Join ASA on Capitol Hill for the annual citizen lobby day, Tuesday, April 11. Patients and advocates will gather for a press 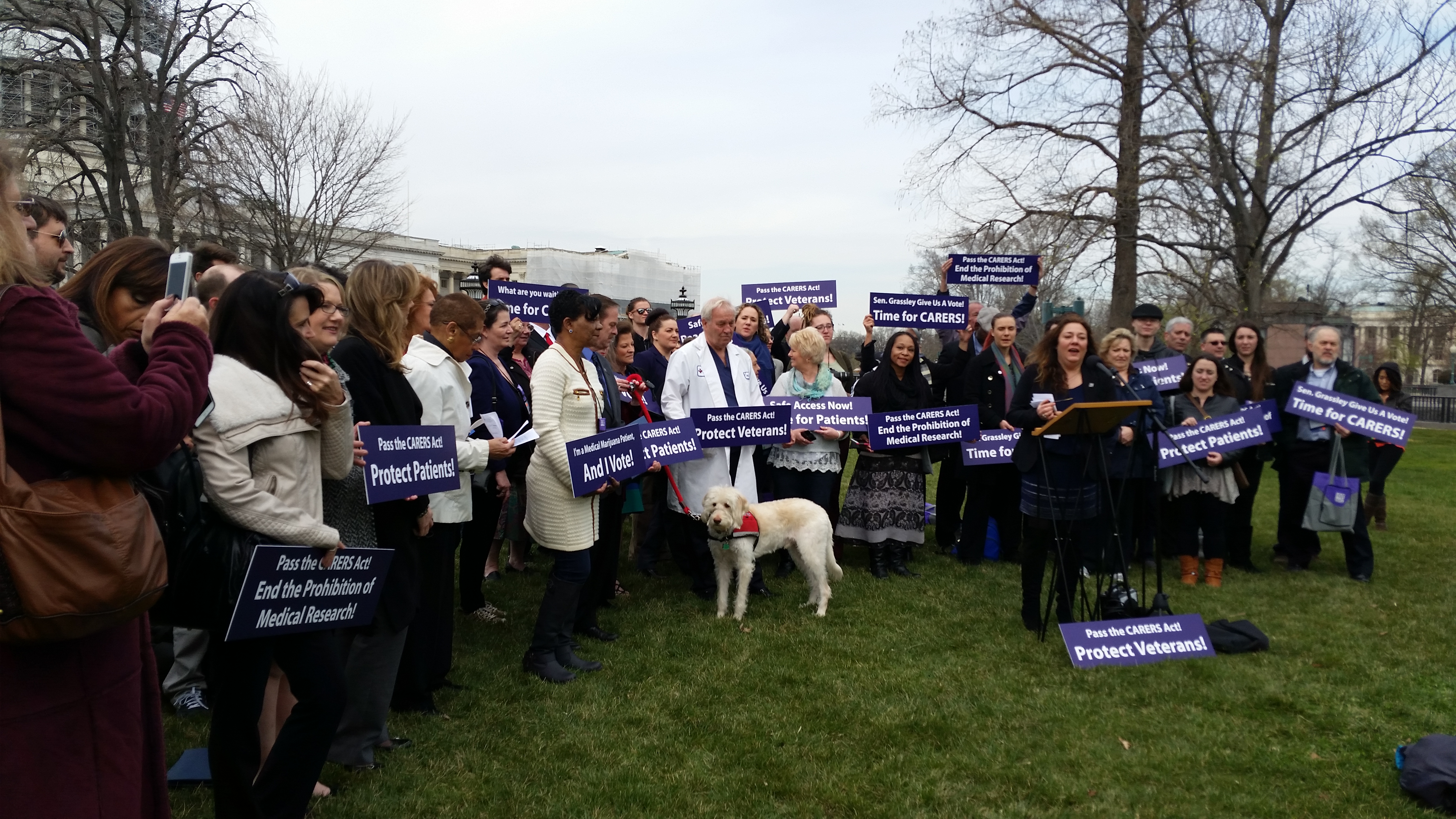 conference with patient advocates, including Nichole Snow, at 11:30am at Demonstration Area 10 of the United States Capitol Grounds, Washington DC.

If you can’t make it in person, you can still let your Senators and Representative know why patients need Congress to take action now by calling them on Tuesday. The more voices for safe access they hear Tuesday, the more likely they are to take action, so mark your calendar and make those calls!

It’s easy with this toll-free number that automatically puts you through to your US  senators and representatives. 1-844-872-0234.