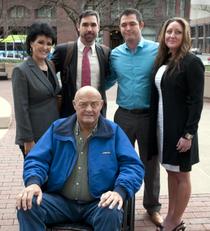 Trial starts Wednesday in a widely watched federal medical marijuana case from eastern Washington State known as the Kettle Falls Five. The Obama Administration is aggressively pursuing marijuana trafficking charges against a family of patients who claim to have been growing for themselves in full compliance with Washington State's medical marijuana law. The Department of Justice (DOJ) is also choosing to try them in defiance of a recent Congressional ban on DOJ interference in the implementation of state law.

What: Trial of the Kettle Falls Five, medical marijuana patients growing for themselves in eastern Washington State
When: Jury selection begins Wednesday, February 25th at 8:30am and the trial is expected to run until next week
Where: Room 902, Thomas S. Foley U.S. Courthouse, 920 West Riverside Avenue, Spokane, WA 99201

"The Obama Administration has so far ignored a Congressional order to stop prosecuting patients in medical marijuana states," said Kris Hermes, spokesperson with Americans for Safe Access. "With no place to turn from a vengeful federal government, the remaining Kettle Falls Five patients will be forced to rely on jurors to do the right thing and acquit." Because marijuana is illegal under federal law, the prosecution can and always does omit all evidence from trial related to medical necessity and compliance with state law. The prosecution will likely object to any mention of the phrase "medical marijuana" being used in the courtroom for the entire trial.

The Kettle Falls Five is made up of mostly family members, including Harvey's wife Rhonda Firestack-Harvey, 56, her son Rolland Gregg, 33, daughter-in-law Michelle Gregg, 36, and friend of the family Jason Zucker, 39. Larry and Rhonda are retired and have a home in rural Washington State near the town of Kettle Falls. In August 2012, the Drug Enforcement Administration (DEA) raided the property and seized 44 premature marijuana plants, charging the five with conspiracy to manufacture and distribute marijuana, manufacture and distribution of marijuana, maintaining a drug-involved premises, and possession of firearm in furtherance of a drug trafficking crime.

Even though Larry Harvey's charges were dismissed, he will still be seriously impacted by the trial. Specifically, Rhonda Firestack-Harvey, if convicted, will no longer be able to care for her ailing husband whose cancer has spread to his liver. The cultivation for which Harvey's family is being tried was on his property and tended to by the couple. "If Rhonda goes to prison, I don't know who will take care of me," said Larry Harvey in a recent prepared statement. "I thought the law passed by Congress and signed by President Obama was supposed to stop the DOJ from prosecuting my family, but so far, there's been little relief."