Four family members and a close family friend in a rural town in northeastern Washington are facing years in federal prison for growing marijuana for their personal medical use.

Larry Harvey, 70, his wife Rhonda Firestack-Harvey, 55, their son Rolland Gregg, 33, and Rolland's wife Michelle, 35, as well as close family friend Jason Zucker, 38, claim they were individually growing 74 marijuana plants for their own medical use at the Harveys' rural home near Kettle Falls, Washington, as is their right under state law.

"There is no hidden agenda here," Rhonda said Thursday in a statement to the media. "My husband and I are retired, but work hard to live a peaceful, sustainable life in the northeast Washington wilderness. We both have serious health issues and were told by our doctors that medical marijuana could help. All five of us have qualifying conditions, actually, and the garden was below the limit of 15 plants per patient."

"It's outrageous that the federal government is wasting money prosecuting five patients who were in total compliance with state law," Rhonda added.

The Harvey home was first raided by state authorities in August 2012 after two flybys from Washington state's Civil Air Patrol -- the official civilian auxiliary of the United States Air Force -- reported an apparent marijuana grow near the Harvey residence.

On August 9, according to a motion filed by the Washington state U.S. attorney's office, state law enforcers raided the Harvey property and found 74 plants growing near the home. Under the presumption that the family was growing this cannabis as a collective, rather than individually, officers seized 29 cannabis plants so that the family would be compliant with state law, which limits collective crops to no more than 45 plants. The authorities did not press charges or seize any other assets.

However, days later, on August 16, federal authorities showed up with a new warrant and conducted a more comprehensive raid. At the time, authorities were enacting a widespread crackdown on medical marijuana providers -- an effort that extended into states like California and Colorado -- at the directive of the Obama administration. During the Aug. 16 raid, Drug Enforcement Administration agents seized the Harveys' remaining marijuana plants, as well as about five pounds of raw cannabis and some marijuana-infused edibles from the freezer.

The feds also seized a 2007 Saturn Vue, $700 in cash, a computer, a motorcycle and an ATV, along with the family's legally owned firearms.

"This is not the kind of spectacular haul that the DEA is typically called in for," the family's attorneys wrote in a letter to Attorney General Eric Holder this February urging him to reconsider the charges. "Just the opposite, the evidence seized is consistent with the type of strict medical dosage that occurs with a doctor's supervision." 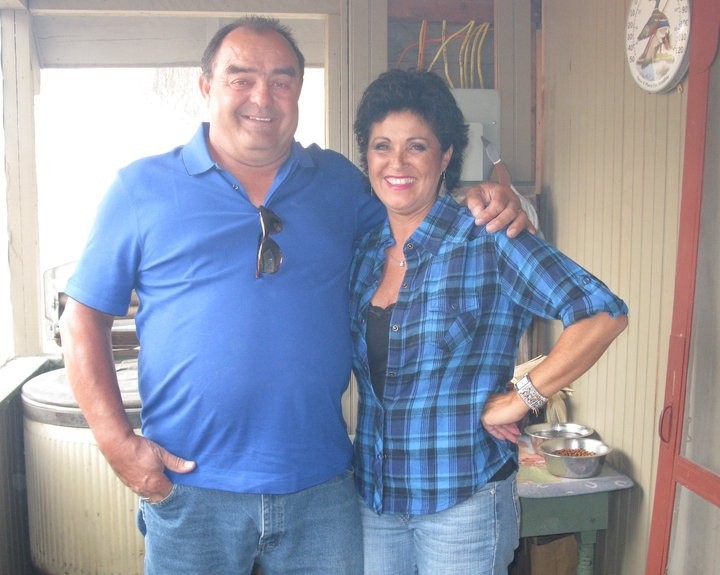 In 2013, the five patients were indicted by the Eastern Washington attorney general's office. According to the defendants' attorneys, all of them were growing cannabis in compliance with state law. Still, the federal government has charged each of them with six felonies apiece, including manufacturing, possession and distribution of marijuana, as well as the possession of a firearm in furtherance of drug trafficking, according to the indictment.

Because their trial is being held in federal court, it may not be enough of a defense for the family to argue that they were compliant with state law.

In a motion filed Wednesday, Michael Ormsby, the U.S. attorney in eastern Washington state involved in the case, requested that "any evidence of medical purposes as well as the defendants' belief that they were lawfully engaged in marijuana cultivation" be inadmissible in court. Ormsby argued that the family's purpose for growing the marijuana is not the issue. Rather, he said, the "knowing or intentional manufacturing of marijuana" is all that matters in this case.

Although the state of Washington legalized the use of medical and recreational marijuana in 1998 and 2012, respectively, the federal government continues to ban the plant, classifying it as a Schedule I substance "with no currently accepted medical use."

"For Larry, if he goes to prison, because of the severity of his ailments, I don't think he'd survive even a reduced sentence," Kari Boiter, the Washington state coordinator for the medical marijuana advocacy group Americans for Safe Access, told The Huffington Post.

When the five defendants were originally arrested after the raids, Larry spent just 17 days in jail, but emerged with a permanently disfigured foot, according to Rhonda. Larry has severe gout and Rhonda says he was denied the medication he needed while in jail, leaving him with even more trouble walking than he had before.

Each one of the defendants is a qualified medical marijuana patient under Washington state law, and each began using after their doctors recommended the substance to help treat their respective ailments.

Rhonda and Larry, who own the home in eastern Washington, and the other three defendants -- all of whom live in the Seattle metro area, where there is less open space for outdoor growing -- grew their medical cannabis cooperatively on a plot of land next to the Harvey home for reasons of cost and convenience.

Larry, a recently retired commercial truck driver of 30 years, ate marijuana-infused cookies to ease symptoms related to gout and chronic pain and inflammation, according to the family's attorneys. His wife, Rhonda, suffers from osteoarthritis and has undergone multiple joint and bone surgeries. A small amount of medical cannabis eased her inflammation and pain.

Federal authorities are charging the Harvey family with growing "100 or more" marijuana plants -- a charge that dramatically increases related fines and prison sentencing -- alleging that the family had grown a crop in 2011 similar in size to the one seized in the raids the following year. The charge is based on "numerous" photos, found on a seized computer from the residence, that allegedly depict the defendants in the grow at the same location in 2011, according to the motion filed by the U.S. attorney's office. 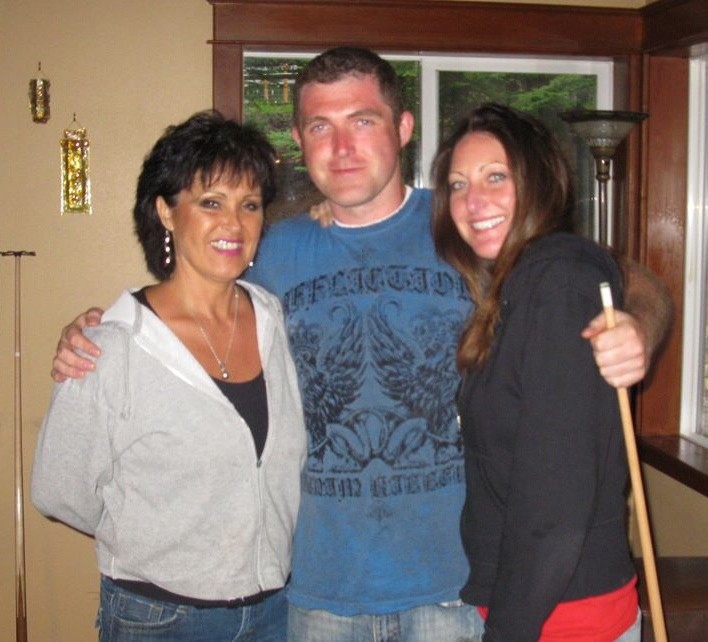 Rhonda, pictured left, with Rolland Gregg and his wife Michelle.

Larry and Rhonda live in the wilderness of northeast Washington, near the U.S.-Canadian border, and have encountered black bears, cougars and coyotes at their front door "on several occasions," according to the family's lawyers. Because of that, Larry kept a loaded handgun in a master bedroom dresser so that while he was away for work his wife would be able to protect herself.

But the federal government claims that the presence of a firearm indicates the five defendants were somehow involved in drug trafficking.

"Larry and I lead a simple life," Rhonda said in her statement Thursday. "We chop down all of our own firewood so we can lower our electricity bill, and I grow my own fruits and vegetables in the garden that I use for canning and to make pies and jam and stuff. We rely on hunting and fishing to keep ourselves fed throughout the year, which is why we own guns. Now, the federal government is using the guns against us -- all five of us -- and saying that each of us should serve at least five years in prison just for the gun charge alone. It doesn't matter that we used the shotgun to hunt turkeys and the hunting rifle for deer."

In their letter to Holder, the defendants' attorneys argued that there is no proof these five people are "perceived to be violent in any way," and say that the firearms had "absolutely nothing to do with the cultivation of cannabis."

"This is a mom and pop on a family homestead near a National Wildlife Refuge in the Northeastern corner of Washington, where the nearest town is 10 miles in any direction," the attorneys wrote.

In June 2011 and again in August 2013, Deputy Attorney General James Cole issued guidelines for all U.S. attorneys stressing that it is "not an efficient use of federal resources to focus [medical marijuana] enforcement efforts on seriously ill individuals."

But ASA's Boiter says that Cole's memos are meaningless in the face of cases like the one being brought against the Harvey family.

"This case is another glaring example of what's wrong with the federal policy on cannabis," said Boiter. "If the Justice Department can continue to aggressively prosecute individual patients without any consequences from the White House, none of these DOJ memos are worth the paper they're printed on."

The family's attorneys argue that there is an "equal justice disparity" created by federal drug laws that directly contradict state laws in Washington, where medical marijuana has been legal for well over a decade.

"In the very city where the Harvey family is set to stand trial, an ordinance was recently passed to establish groundbreaking licensing requirements for aspiring entrepreneurs in the existing medical marijuana field, as well as those planning to enter the emerging [recreational] marketplace," the attorneys wrote in their letter to Holder. "These conflicting realities cannot co-exist."

Furthermore, the charges against the five defendants and the punishment proposed are in stark conflict with recent statements from Holder and President Barack Obama regarding drug crime sentencing, the attorneys argue.

In March, Holder announced his support for sentencing reform that would reduce prison time for some nonviolent drug crimes. And last week, a White House official told Yahoo News that President Barack Obama may end up granting clemency to "hundreds and perhaps thousands" of people who have been jailed for nonviolent offenses.

Now that all five defendants have rejected the plea deals, their federal trial is expected to begin later this month. An official from the U.S. attorney's office in eastern Washington familiar with the matter said that the office cannot comment on ongoing cases. 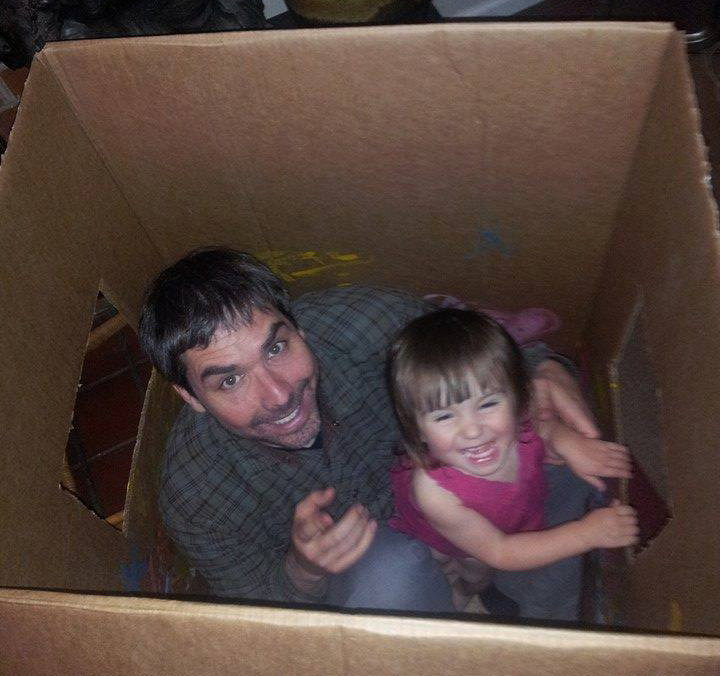 Jason Zucker playing with his daughter the evening of the pre-trial hearing.