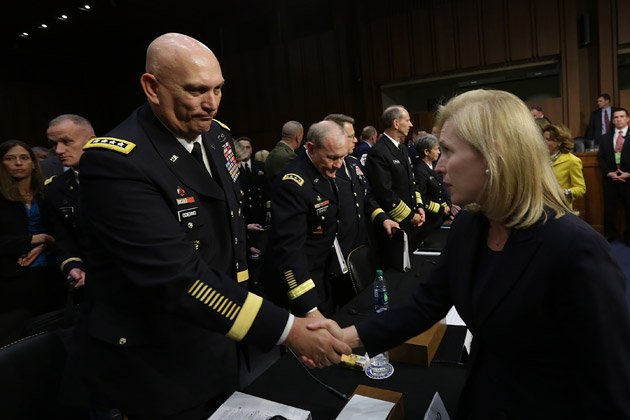 A bipartisan group of 21 members from both the U.S. House and Senate has sent a letter to the Veterans Administration urging them to revise their medical cannabis policy. The current V.A. policy expires at the end of January. That policy prohibits their doctors from filling out state medical cannabis forms or even discussing the potential benefits of the therapeutic substance with their veteran patients. Veteran advocates for medical cannabis access have characterized the current policy as a "gag order."

Today's Congressional letter seeks to allow their physicians to recommend the therapeutic substance in accordance with state law. The letter points out that this policy was approved by the Senate as part of the funding bill it approved 93-0 in November, but the provision was not included in the final version of the bill. The policy change was narrowly defeated during a House appropriations vote in April, 213-210, which was an increase of 15 aye votes from the year before. If approved in this year's appropriations bill, the protection would have to be renewed with a vote each year. The issue is also addressed in the CARERS Act, which would permanently solve the issue without the need for annual reauthorization.

Medical cannabis has tremendous therapeutic potential and a growing body of medical evidence to treat conditions that veterans face. One study showed a 75% reduction in severity of PTSD symptoms when patients were using cannabis compared to when they were not.  Complementary and substitution therapy for opioids in pain treatment can increase the effectiveness of lower doses of opioids and help prevent overdose fatalities. Another study showed that treatment with the marijuana compound THC resulted in decreased mortality for those suffering a traumatic brain injury. This is but tiny sampling of the growing body of more than 400 case studies and clinical reports that supports the medical efficacy of marijuana for these and other condition.

Given the vast medical potential that cannabis may provide for veterans and the growing support in Congress for veterans to have access, the V.A. would be wise to update its policy to lift the "gag order." The change would not force any V.A. physicians to recommend medical cannabis, but would simply give them one more tool in the their toolbox to use when appropriate in the sound medical judgement.

Today's letter was signed by the following Members of Congress: