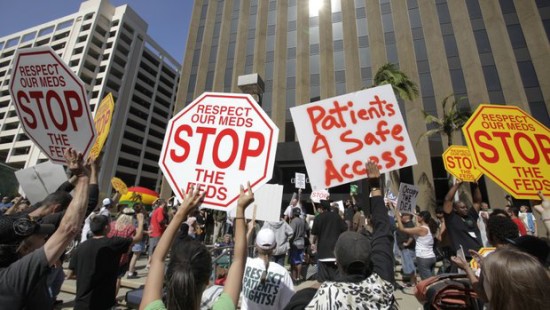 San Diego, CA - Yesterday in court, absent their clients, attorneys Michael J. McCabe and Heather Bugan argued a motion to dismiss the charges in a medical cannabis case. The argument was based on a much-publicized federal spending bill that is proving promising for cannabis patients.  The congressional spending bill – which has language that restricts the use of federal funds to enforce cannabis laws in states with medical cannabis programs – was signed into law in December of 2014. The bill lists all U.S. States with medical cannabis programs and California is one of them.

Ms. Bugan and Mr. McCabe argued the DEA had no authority to apply for a search warrant which led to a raid on their client’s property because it interferes with California’s medical cannabis program and violates a congressional directive. Based on reports and testimony, DEA Special Agent Sharp filled out an affidavit to obtain a search warrant, but did not disclose important information including the cannabis patient status of defendant, Winston Ludlam.  Sharp gave the sworn statement to San Diego Superior Court Judge Peter Deddeh to sign. This happened in January, well after the congressional budget restrictions went into place.  Mr. McCabe plans to use a Franks Hearing to get to the truth about the affidavit.

In argument from the prosecutor, Marissa Bejarano, a local attorney from District Attorney Bonnie Dumanis’s office, maintains that the DEA keeps private grant money aside for cannabis enforcement and the defense should be required to prove the funding stream that lead to the affidavit. Since Agent Sharp’s salary is paid by the federal government it is a tough sell. Bejarano also argued that cannabis concentrates are not covered under California’s medical cannabis program.  Mr.McCabe was quick to mention a pending case, People v Mulcrevy, that may refute that statement and further pointed out the prosecution can not defend the false affidavit using the concentrates found because of it.

Buejarano also questioned the defendants’ standing to bring the motion forward in the first place. This led to her own investigating agent, Sharp, being brought to the stand on behalf of the defense. The issue was whether the defendants could assume a right to privacy and since they were not in court to assert they lived in the residence and expected privacy, the agent was required to testify to the fact that Winston and his co-defendant lived in the residence.

Judge Deddeh who signed the warrant and is now hearing the defense’s motion questioning its legality, is moving cautiously. Recently, this judge was overturned on appeal on another medical cannabis case, People v Orlosky.

His honor denied Mr. McCabe and Ms. Dugan’s motion without prejudice because he wants the defense to prove Winston Ludlam and his co-defendant were qualified patients. Mr. McCabe and Ms. Bugan plan to re-file their motion at which time more argument will be heard.

There were several supporters present in court along with a journalist. We did not get to catch up with Winston and his co-defendant this time but we learned they are not in custody and we hope they are well. Please watch for updates on a new hearing date. This is a very interesting and ground breaking argument in San Diego.

Since 2003, Terrie has been a volunteer in harm reduction and drug and prison policy reform in San Diego.  She is an advocate of medical cannabis patients’ rights. Terrie is the Advisory Committee Chair of San Diego Americans for Safe Access and is focused on court support and building a bridge between the recovery and medical cannabis communities in San Diego and reducing stigma surrounding the therapeutic use of cannabis