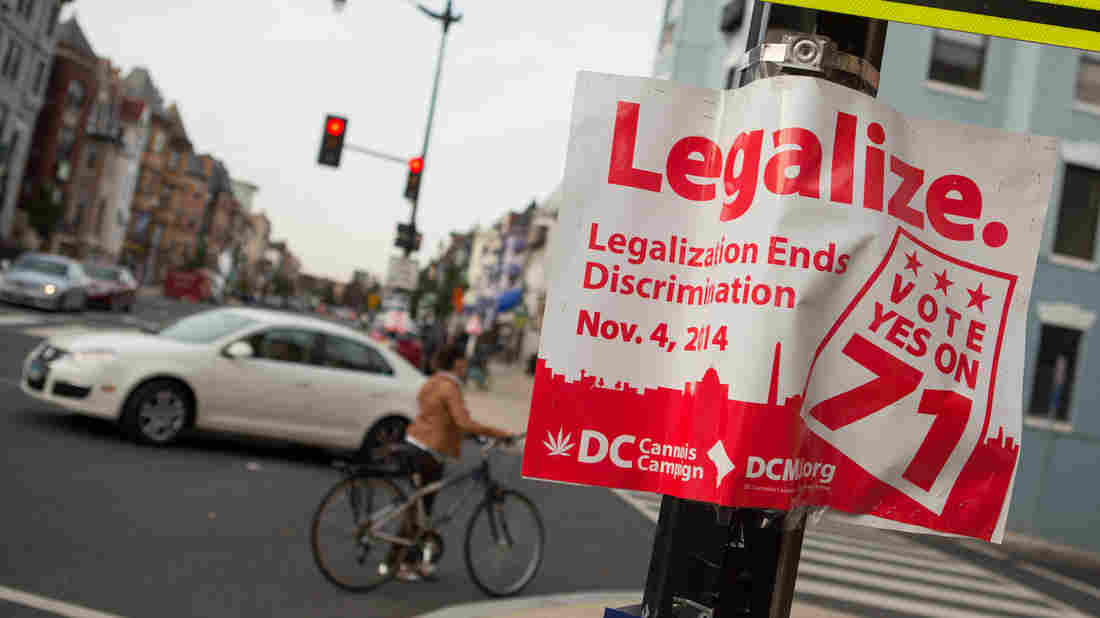 According to District government officials, the adult-use marijuana law,  Initiative 71, will go into effect at 12:01 am on February 26, 2015. While there is much attention surround the implementation of Initiative 71 regarding the District-Federal showdown, as some House Republicans have threatened to take legal action against the District's mayor and employees if the law gets entered into the D.C. Record, little attention has been given towards the impact the law will have on D.C.'s medical marijuana program.

The good news is, the new shouldn't adversely impact medical marijuana patients and the program, but first here's a review of what's in the new law. The new law will allow any District resident 21 years or older to possess up to 2 ounces of marijuana and cultivate up to 6 plants (3 mature/3 immature). Group houses can have no more than 12 plants total (6 mature/6 immature).  Use of marijuana in public will still be illegal, and marijuana possession or use is still completely forbidden anywhere on federal property, which makes up a significant portion of the District. Bars, restaurants, and even front porches are considered public places under the law, so use is basically limited to inside private residences, including decks and enclosed backyards. It is still strictly illegal to sell marijuana in the District, except from medical dispensaries to patients or their caregivers; however, adults may transfer up to 1 ounce of marijuana between each other for free (trying to "backdoor" sales is illegal, for example, you can't sell a jar for a marked up price and then offer to fill up the jar with marijuana for free).

The fact that Initiative 71 included home cultivation is a benefit for patients. The 2010 medical marijuana law included a provision hat the Department of Health was to undertake a study on how the District could add home cultivation to the medical program. Yet the Department never issued the report, and patients were left waiting until 2013 before they could access medicine at dispensaries. The addition of home cultivation now allows patients a second option for obtain marijuana to treat their medical condition, as I-71 contains a provision that none of the conduct permitted by it shall be considered a violation of the medical marijuana law. This is important because the medical marijuana law required that patients only obtain their medicine from a dispensary. Registered patients who pay for marijuana or obtain more than 1 ounce for free in a single transaction would be in violation of the law because those acts are not allowed under I-71 nor the medical use law.

Another reason this law will not harm patients is because no taxes were added, and the bill did not seek to roll the medical program into the adult-use law. Additionally, the law does not expand driving restrictions on medical marijuana patients, which was a key point of contention during (and since) the passage of I-502 in Washington State and has lead to a sharp increase in arrests despite no perceived increase of actual impaired driving in the state. The WA provision included a per se THC metabolite standard that can cause patients to test positive more than 24 or even 48 hours after they last used their medicine. Thankfully, the District law avoids this issue.

While I-71 was not able to include retail stores to sell medical marijuana, the D.C. Council has already begun to look at options. Again, the supporters of the bill that would allow adult-use retail stores wisely does not attempt to roll the medical program into the adult-use program.  While the proposal would for dispensaries and cultivation centers be dual-licensed for both the adult-use and medical programs, no new taxes would be imposed on D.C. patients, who currently pay sales tax.

The one potential area that could cause problems for the medical program is availability of medicine for patients. Currently District cultivation facilities are limited to 500 plants total, and there are only 3 facilities currently operational. While it looks like two more facilities will open in the near future, the number patients in the District is already around 2,500. This could mean that patients may have to pay even more for their medicine than the current prices, which today regularly sells for $25 per gram at least one dispensary, according to patients. The proposed adult use law does not have plant caps at the cultivation facilities, but if roll out is poorly timed, patients could face medicine shortages and price spikes. Considering the pressure local communities put up against medical cultivation facilities coming into their neighborhoods, adult-use cultivation facilities may be slow to implement. However, this bill cannot even get an official legislative hearing, due to the budget restrictions on marijuana reform in the District.

As the District continues to move away from criminalized marijuana, it appears to be doing so in a way that is mindful of protecting patient access through the established medical program. The District would be wise continue this approach and not do anything that could jeopardize access for patients in the District.