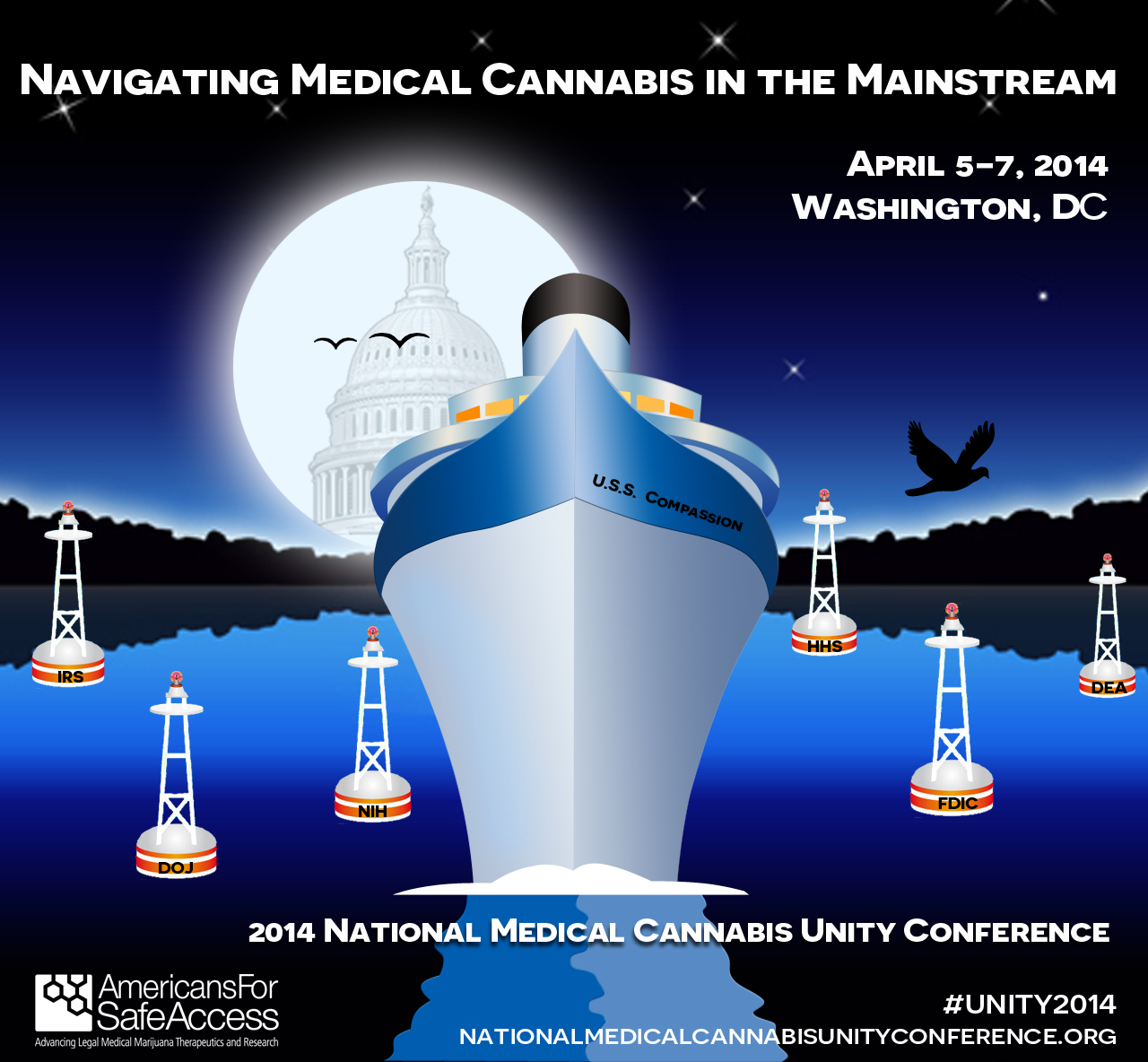 Plotting a course forward for state and federal policy on medical cannabis is the agenda for patients, parents, medical professionals and other stakeholders gathering in Washington, D.C. this weekend at Americans for Safe Access’s second annual National Unity Conference. Legal access to medical cannabis has been supported by the American public for decades, and it is the law in 20 states and the District of Columbia, but this issue can be complex, and successfully navigating it requires a clear understanding of where we’ve been, what we know, and where we want to go.

The facts about medical cannabis are frequently counter-intuitive. On the medical side, cannabis stimulates appetite (so much everyone knows the slang name for the effect), but those who use it are on average thinner and have less of a chance of getting diabetes … because it helps regulate insulin. The smoke contains tars similar to tobacco, but there is no link to lung cancer among even the heaviest users … because it has a protective effect.

For opponents of medical cannabis, the policy side has proven counter to their intuition as well. Many opponents said with confidence that allowing medical use would send a message to kids that marijuana is safe and increase teen use. But studies of medical cannabis states shows the opposite: states with medical cannabis laws  have seen teen  marijuana use drop since the laws were enacted. Some law enforcement predicted an increase in drugged driving and more accidents if anyone had legal access, but the data shows the otherwise: states with medical cannabis laws have fewer fatal traffic accidents. And just last week, one of the favored talking points of the opposition – that medical cannabis and facilities that distribute it must contribute to crime was debunked by a statistical study from the University of Texas showing that the rate of assault and property crimes doesn’t increase when states pass medical cannabis laws, it drops. (The Effect of Medical Marijuana Laws on Crime: Evidence from State Panel Data, 1990-2006.)

A virtue of our federalist system is that states can be laboratories of experiment in devising laws on controversial social policies such as medical cannabis. States can often act more nimbly than Congress, and the nation can see what works, what doesn’t and make choices accordingly. The 17 years of experimentation on implementing medical cannabis laws has shown that medical cannabis can be produced, manufactured and distributed to a population in need without negative impacts on public safety. However, the fear of federal intervention has made policy makers restrict programs in hopes that their state will not have to endure federal raids to the point that the many of medical cannabis laws are not for those the laws aim to aid: patients

The first medical cannabis laws only gave patients a defense in court if they were arrested and charged for using, possessing or growing the cannabis that their doctors had told them might alleviate their suffering. Almost everyone could agree that no one should be behind bars for following their doctor’s advice. As research advances in the 1990s revealed more of the remarkable mechanisms behind how cannabis can treat so many types of conditions when other drugs can’t, attention turned from keeping the sick out of prison to devising sensible plans for getting them medicine. By the late 2000’s, every state that was adding medical cannabis laws included guidance for distribution.  In the last decade, public health officials have become focused on ensuring quality control and establishing industry standards for testing, packaging, and all the other regulatory details we take for granted with medical products.

Guidance for those regulators is now available. Standards for commercial medical cannabis products, as well as the reliability and quality of related services, were created in 2011 by the American Herbal Products Association (AHPA), the principal U.S. trade association and voice of the herbal products industry. Scientifically valid methods of testing the identity, purity, potency, and quality of cannabis products were established late last year when the Americans Herbal Pharmacopeia (AHP) issued a definitive, comprehensive account of the plant’s botany and constituent components.

Applying these new insights and standards to crafting good policy is the goal of the advocates who will be gathering at ASA’s conference. To help, conference attendees will hear from a host of experts. Capitol Hill heavy-weight Jim Tozzi of the Center for Regulatory Effectiveness will discuss how federal regulations work, or don’t. Herbal product scholars will recount the history of botanical medicines in the United States. Experts will assess the future of regulation and product safety, including which state laws are working and which are not. Scientists will address the myths and facts of CBD (cannabidiol), a cannabis chemical that’s been getting enormous attention for its ability to alleviate intractable seizure disorders. Among the featured speakers are Sebastopol Mayor Robert Jacob, inventor and Harvard professor Stephen Corn, M.D., cannabis researcher Jahan Marcu, PhD., University of Massachusetts Amherst Botany Professor Lyle Craker, Criminal Justice Policy Foundation President Eric Sterling, author Martin Lee, and many more.

On Monday, April 7, ASA will host a noon press conference and briefing for Hill staff on the Capitol grounds, and a lobby day to bring the issue to Members of Congress. More than one-third of the US population lives in states with medical cannabis laws, and over one million Americans are legally using medical cannabis under the care of a physician. But authorizing the use of cannabis for medical purposes is only the first step; the nuances of how you distribute and regulate it are crucially important. Legislators and voters in over a dozen states are considering new legislation on medical cannabis. After all these years of state experimentation, America should be ready to do it right.

A lot has changed in the 14 years I have been a medical cannabis patient. We’ve reached a scientific consensus that cannabis and its compounds have medical value. Now the debate is about how Americans will have access. The largest remaining opponent to letting doctors and patients make decisions about medical cannabis is the Drug Enforcement Administration (DEA), which has resorted to changing its rules under the Controlled Substance Act and ignoring its own judges to keep cannabis in its natural form illegal.

This new debate about how to regulate access for patients has thrust the issue into other current debates, such as the role of botanical medicines in health care, the taxation of health care, and the overlapping responsibilities of cities, states and our federal government. Congress should appreciate that the State experiment has done much of the work of navigating medical cannabis regulation. They can easily resolve the state and federal conflict by handing over the regulations of an unregulated substance to the states.

Moving forward on medical cannabis policy isn’t partisan; it is not a sign of liberal leanings or being soft on crime. On the contrary. Supporting a medical cannabis policy that respects the State experiment to stop treating patients as criminals and regulate how they get their medicine simply acknowledges the outcomes. Congress should encourage states to show compassion for their most vulnerable citizens, participate in exciting medical research and bring in much needed revenue -- all while reducing teen use of marijuana, reducing driving fatalities and reducing crime in communities.