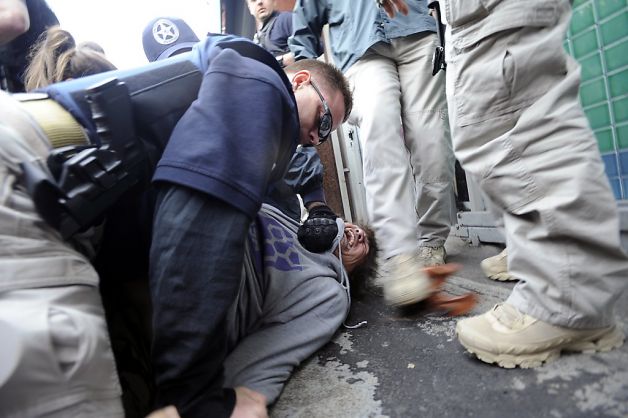 Join us in supporting the journalist and his Dream Team of Pro Bono Legal advocates who believe Jose was willfully targeted as a ringleader, and beaten for his first amendment expression. He was reporting live on KPFA's Flashpoints during the execution of the federal search warrant at multiple locations related to Oaksterdam University. He has been convicted of assault on a federal officer, when he was beaten and hospitalized. There was no bruise of the injured officer, in fact all three of the officers injuries were on their knees & elbows during the altercation that took place after the so called assault.

This case represents Every Citizen’s Right to Protest and is a consequence of the continued conflict between state and federal law on medical marijuana. This was a strike against permitted, tax paying Medical Cannabis Dispensaries. The physical assault on Mr. Gutierrez was a violation of First Amendment rights and must not be tolerated. Law enforcement failed to control the crowd of protestors, who were permitted by the city of Oakland, and were never given instructions on where they could or could not protest. Law enforcement failed to quarantine the area and properly execute this search. Professionals, and Journalists were caught in a crowd that was surged by law enforcement as they pushed their way to the front door.

The events that unfolded on April 2, 2012 defy justice, escalating into a mess that could have been avoided had Obama and his administration kept their word and left legitimate state abiding taxes paying lawful dispensaries operate without unneeded federal intervention.

Come Out & Show Support at Jose's Sentencing Hearing This Friday!

The charge faces a maximum of 8 years of federal time, the current probation report is recommending 6 months of federal incarceration, and 6 months in a halfway house. Please come show the court that the community is against more precious resources being wasted on a menial case.

*Reminders please note this is a FEDERAL courthouse, please bring a Valid ID to enter the building, security is similar to an airport, please leave all your medicine at home, cameras are not allowed in the building. Cell phones must be turned off.

To confirm details about Friday’s hearing, and how to support in the future, you can reach E. D. Lerman’s legal assistants at 707 540 4025.

For More Information on the case: http://www.ladybud.com/2013/09/04/the-aftermath-of-the-2012-oaksterdam-raids-activist-jose-gutierrez-targeted-and-beaten-by-dea-agents-faces-charges-of-assault-on-federal-officer/

Make a donation to the case through green aid: http://green-aid.com/cases/jose-gutierrez/

Check out this video of the Blue Sky Cafe shut down by FBI, DEA & IRS