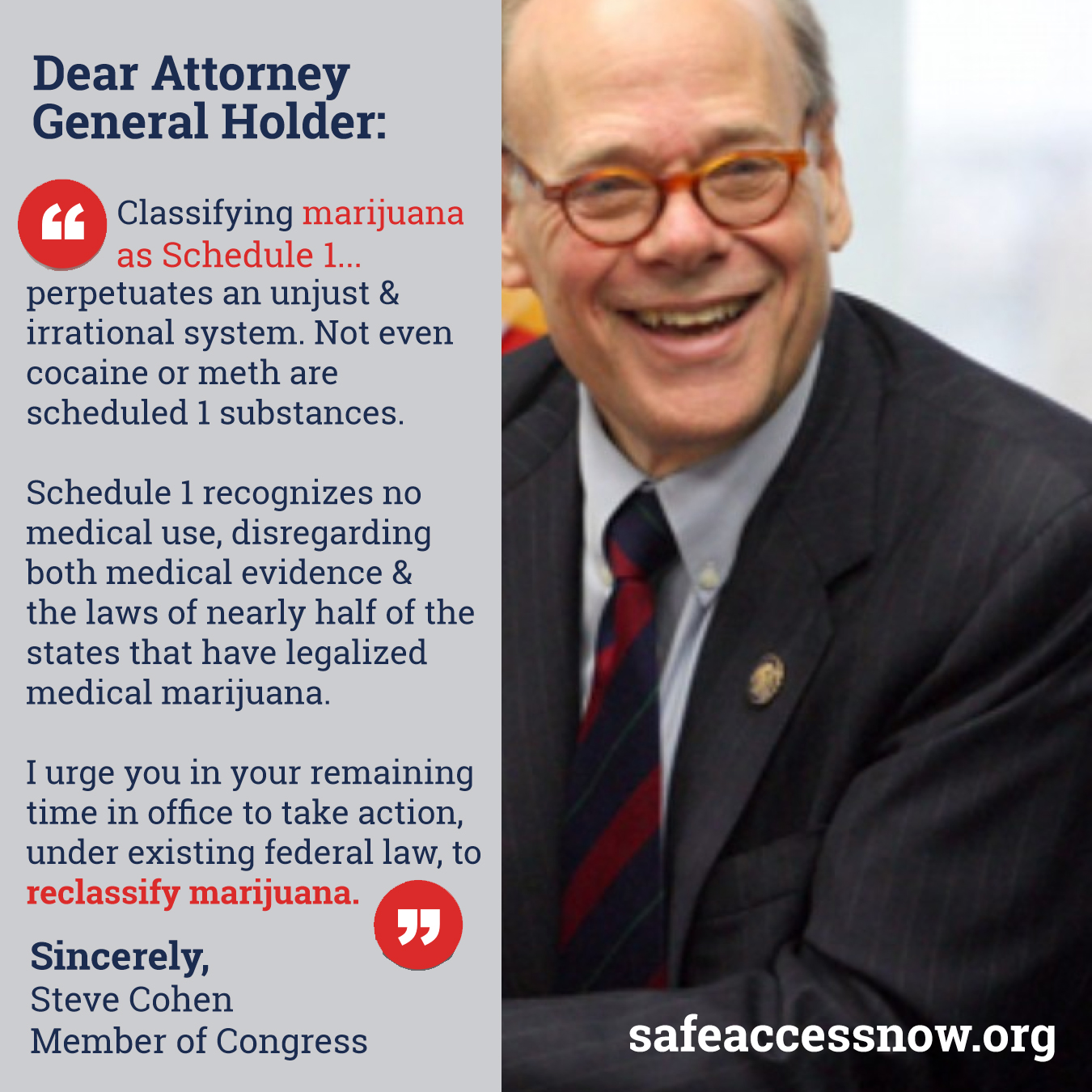 This week, Representative Steve Cohen (D-TN) sent a letter to Attorney General Eric Holder urging him to use his remaining time in office to use his statutory authority to redesignate marijuana out of Schedule I of the Controlled Substances Act. The letter came in response to comments that AG Holder made at the National Press Club on Tuesday that hint at Holder may be thinking the same thing that patient-advocates have been thinking for decades - Schedule I designation is of marijuana is inappropriate.

While AG Holder did not directly take an affirmative position one way or the other, saying "I think, a legitimate debate to be had on both sides of that question on where marijuana should be in terms of scheduling," the very fact that there is a legitimate argument in favor of the medical efficacy and relatively low potential for abuse certainly undermines the argument for keeping marijuana's current Schedule I status. Despite the fact that marijuana's Schedule I status (along with the even more research-inhibiting Public Health Service review process) has stymied large scale cannabis research in the United States, a mounting body of medical evidence keeps building that demonstrates its medical value.

In terms of abuse, marijuana is certainly less harmful than Schedule II drugs such as cocaine and methamphetamine, as Rep. Cohen pointed out. While some may say that marijuana is more likely to be used than cocaine or methamphetamine, drugs such as caffeine and over-the-counter pain medicines are more likely to be used than marijuana, therefore frequency of use alone is a poor indicator of abuse potential. With that in mind, it's difficult to see why marijuana should placed in Schedule I or even Schedule II, or if it even belongs in the Controlled Substances Act at all.

The letter comes just days after the Brookings Institute published an article explaining the process by which marijuana can get rescheduled. While the Attorney General may not be able to reschedule marijuana simply by snapping their fingers, AG Holder clearly has statutory authority to begin the "official" debate that he said was legitimate during his National Press Club remarks.

All of this has happened during a week in which parents and family of pediatric patients and others have been sending postcards to First Lady Michelle Obama to get her support for rescheduling. In addition to the postcard campaign, the Parents Coalition to Reschedule Medical Cannabis has also launched an online petition as part of the their #stoptheseizures campaign to reschedule marijuana.

Congressman Cohen is a longtime champion of medical marijuana patient rights and consponored legislation in the previous session of Congress to reschedule marijuana to somewhere between Schedule III-V. He also cosponsored the landmark Rohrabacher-Farr Amendment, that was approved as part of the FY2015 Department of Justice budget in December to restrict the DOJ's ability to interfere with state medical marijuana laws.