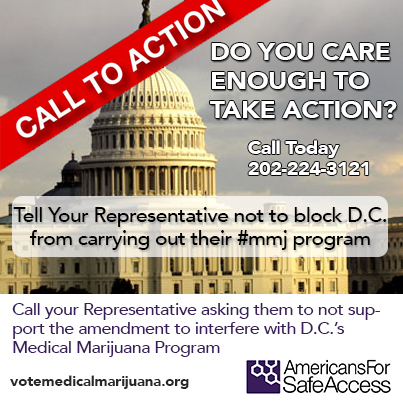 Right now, some members of Congress are considering offering an amendment that could completely undermine safe access to medical marijuana in the District of Columbia. The assault on safe access is a double whammy against D.C. patients because they have no voice in Congress, and therefore need your help to contact your House Representatives.

Members of the House Appropriations Committee are looking to insert an amendment that would block the District government from carrying out D.C.’s Medical Marijuana Program. The measure is nearly identical to the “Barr Amendment” that blocked D.C. from implementing it’s medical marijuana ballot measure from 1998 to 2009.

Don’t let Congress turn back the clock on safe access to medical marijuana for D.C. patients! We need you to call your Representative on the House Appropriations Committee and urge them not to support the amendment with the following message:

Please do not support the amendment to the Financial Services and General Government Appropriations Bill that would block the District of Columbia from carrying out our medical marijuana program. District residents overwhelmingly support the D.C. Medical Marijuana Program, and the patients enrolled in the program are not represented by anyone who gets to vote on this amendment. The House already voted in May to respect the rights of locally adopted medical marijuana laws with the bipartisan victory of the CJS Medical Marijuana Amendment, 219-189. Please respect locally adopted D.C. laws and and the patients enrolled in the District’s program, as they have no elected officials who get a say on this amendment.

I urge you not to support the amendment to interfere with the District’s medical marijuana program. Thank you.