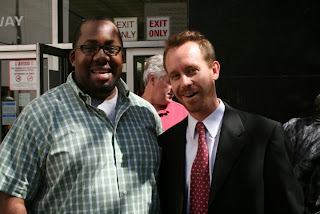 San Diego CA - Opening statements have ended and the prosecutor has called two witnesses in Jovan Jackson’s third medical cannabis trial.  This, after a telling day and a half of jury selection where we heard at least six potential jurors stand up and say they would not convict on unjust drug laws, resulting in their dismissal from being considered as jurors by judge Hanoian, the judge assigned to hear the case.

Jury selection began Thursday, October 24th and lasted into Friday. The process, known as voir dire, was peppered with statements from would-be jurors disclosing that even if prosecutor Chris Lindberg, the man who has persecuted Jovan since 2008, proved his case beyond reasonable doubt the jurors in question would still not be able to vote guilty in deliberations.

The reasons these citizens gave for their dissent varied from assertions that drug laws are designed to victimize people of color to one gentleman who said his sister died of cancer and medical cannabis helped her so much that he would never convict anybody for providing medical cannabis to sick people.

The nullification of unjust medical cannabis prosecutions by jurors is and will continue to be a serious threat to San Diego District Attorney Bonnie Dumains’ ability to perpetuate her reign of terror using the courts to punish sick and dying patients for choosing an alternative medicine in medical cannabis.

After seating a jury of twelve with two alternates, Friday marked the first day of Navy veteran and Answerdam Collective directing member Jovan Jackson’s third trial. In the first case in November of 2009, Jovan was acquitted of all medical cannabis charges but in the second - stemming from a second raid on Answerdam - Judge Howard Shore denied Jovan’s medical cannabis collective defense known as the Medical Marijuana Program Act (MMPA) on the grounds that the collective must have only consisted of cultivating members for Jovan to be entitled to the defense.  As a result of this denial, Jovan was found guilty and Americans for Safe Access, Chief Counsel, Joe Elford, with the help of Lance Rogers, filed and won a landmark published appeal to the guilty verdict in the Fourth District Court of Appeal (People v. Jackson Cal. Ct. App. - Oct. 24, 2012) on behalf of Jovan.

After winning his appeal Jovan’s criminal case was then kicked back to Judge Shore at the San Diego County Courthouse but Lance Rogers, who has defended Jovan since his ordeal began in 2008, challenged Shore’s ability to fairly try the case.  A new judge was assigned in Louis R. Hanoian who has been adamant about heeding the People v Jackson case law and thus not limiting Jovan’s MMPA defense. The MMPA defense case law holds that as long as cannabis medicine is distributed in a closed loop of qualified patient members and further that collectives are not engaged in profit-making, then medical cannabis sales and storefront medical cannabis collectives are legal under California law.

The Prosecutor, Deputy District Attorney Chris Lindberg’s opening arguments had us all raising our eyebrows. His summary of evidence was confusing, anemic and lacked any indication that he could successfully prove Answerdam Collective was making a profit which is what Jovan’s case comes down to after much evolution of the case law. There was also no promise of evidence by Lindberg that medical cannabis was being sold outside Answerdam’s closed loop, another element that would be crucial to prove a departure from the MMPA. Yet, Lindberg told the jury Jovan was hiding behind California’s MMPA law.  He insulted us all with claims that Jovan was making “lot’s of money” simply because withdrawals were being made from Answerdam’s bank account.

Lindberg and the District Attorney’s office are still trying to shock the world that medical marijuana is being sold at all. Lindberg went into great detail explaining how undercover officer Mike Mendez got a false California Driver License under the name Peter Uggla, lied to a doctor to obtain a recommendation for medical cannabis, joined Answerdam and purchased  a quarter of an ounce of medicine. But, Lindberg was not able to assert just how that put Answerdam, and not the detective, outside the law.

Just moments before Lindberg’s opening argument we heard several jurors during voir dire say the medical cannabis recommendation process is fraught with deception, the very deception of the kind Mendez used to get his doctor recommendation. But, apparently it didn’t occur to Lindberg that the subterfuge is laid solely at the feet of law enforcement in this case.

In a strange admission during cross examination Mendez admitted to having a painful football injury but could not say why he chose to lie to the doctor about false claims of back pain instead of disclosing a true condition, illustrating that often the police will lie even when the truth will do.

Yet another false flag the prosecution is perpetrating is the provision in the MMPA defense that a non-patient primary caregiver can provide medical cannabis within the law if they also provide other care such as nursing and housing.  The law does not say a collective MUST provide the care only that it is a defense under the MMPA for providing medical cannabis when the care provider doesn’t have a doctor recommendation.  This portion of the law is specifically designed to allow those who care for house-bound patients to obtain cannabis on behalf of the patient/s they care for without having to get a cannabis recommendation themselves.  Lindberg is intent on trying to prove Jovan was not a primary caregiver to the members of Answerdam, hoping the jury will ignore the other remaining elements of the MMPA defense and convict on this one missing element -  an element that does not even apply since Jovan and all Answerdam members were legal patients.

Jovan Jackson’s defense team, made up of three attorneys Lance Rogers, Nathan Shaman and Rezwan Khan is not getting paid but still putting on a stellar defense as was evidenced by Lance’s opening statements.

In the statements, Lance told the jury Answerdam was a safe place to get medical cannabis, further explaining cannabis must somehow get into the hands of patients who need it, and without collectives such as Answerdam it would not be possible in many cases.  All jurors on the panel explicitly said during voir dire they did not have issues with the efficacy of cannabis as medicine so, it is a short hop to understanding collectives are a crucial part of the voter approved Compassionate Use Act and just how sick people get medicine.  Lance explained the necessary elements of the MMPA defense and said there would be evidence to support those elements.

Also in his opening, Lance told the jury that Jovan would take the stand - something that did not happen in either of his previous trials – and testify to his beginning struggles with opening the collective, his bookkeeping process and how the collective was run.  Lance named several other defense witnesses from the community including Dennis Boisvert of The Human Solution, Donald Clark, MD, Eugene Davidovich of San Diego Americans for Safe Access and Bob Riedel of Mother Earth Alternative Healing.

In early afternoon Friday, Lindberg called his fist witness, San Diego Police Detective Mark Carlson who testified to finding Answerdam’s location information on the internet, conducting surveillance and later assisting undercover agent Mike Mendez in his purchase of medical cannabis at Answedam.  As is typical in these cases, Carlson was unable to answer questions about what constitutes legal behavior in a collective even though he professed to having training in medical cannabis investigations.

Lance Rogers’ cross-examination of Carlson revealed that even though he is a San Diego Detective, Carlson’s office is housed at DEA headquarters where medical cannabis is thought of as wholly illegal in all instances. Lance wanted Carlson to disclose that he, as a cross sworn NTF officer working as an SDPD Detective and DEA agent, serves two masters, one sworn to uphold California medical cannabis law and one sworn to destroy it.

We also heard testimony that Carlson’s surveillance was not the first time law enforcement visited Answerdam as was evidenced by a piece of plywood covering the glass door which had been kicked in during a previous raid.  Lindberg did not want the jury to know about the first raid and subsequent acquittal of charges stemming from the raid and he asked the judge to disallow details of previous law enforcement encounters.  In a discussion outside the presence of the jury, the judge pointed out that Lindberg had elicited testimony about the plywood, opening the door for Lance to clarify why the plywood was there.

The prosecution’s next witness was Mike Mendez, a since-retired San Diego Police Detective who conducted the buy at Answerdam under the name Pierre Uggla.  Apparently a critical error was made in the sting when Mendez armed with false ID signed his true name to the membership agreement at Answerdam outing himself as an undercover officer. However, since a second raid came out of the undercover buy, law enforcement considers it a success.

During the course of the testimony from the two officers we were subjected to grueling details of surveillance at Answerdam leaving us all wondering why, since the case is about whether Answerdam was making a profit, we are looking at pictures of the building, its interior and jars of medical cannabis which totaled 13 ounces. This was yet another indication that the District Attorney’s Office has no case to present.

The day ended with both detectives subject to recall.  Lindberg  expects to call several DEA agents and an accountant next week and indicated his case would conclude by Tuesday, October 29th.

Jovan Jackson is a strong defendant who has been through the wringer and come out fearless.  We spoke many times about his case and his own confidence in his lawfulness.  I would recommend that anybody who has an interest in righting the injustice perpetrated on Jovan they come to court.  The trial is expected to last ten days with one interruption on Wednesday, October 30th, when Judge Hanoian’s courtroom will be closed.

Please plan to join the rest of the supporters from San Diego ASA and The Human Solution who are standing with Jovan in court. The case is being heard in Department 54 of the San Diego Superior Court House at 220 W. Broadway, San Diego, CA 92101.