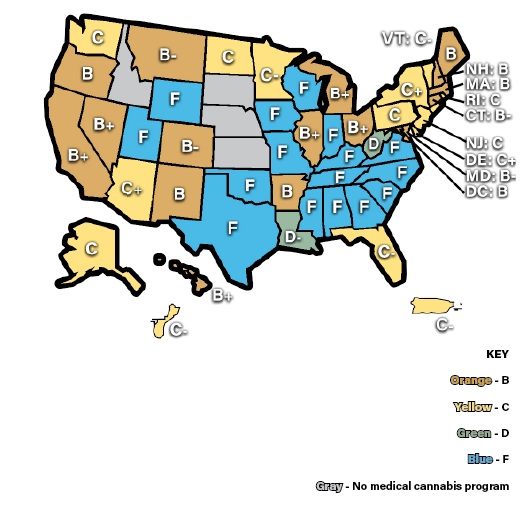 This week Americans for Safe Access released “Medical Marijuana Access in the United States: A Patient-Focused Analysis of the Patchwork of State Laws.” The report examines the status of states that have passed some form of medical marijuana laws and grades them on a 500 point scale based on how well their current law and regulations accommodate patient needs. The report reviews existing laws and regulations and laws passed in between January 1, 2017 and December 31, 2017, giving states letter grades from “A” to “F.”  Unlike previous versions of this report, states are urged to begin to use medical cannabis as a tool to fight the opioid crisis in the areas of improvement section.

How did the states do?

Since the inaugural year of this report in 2015 no state has yet to receive an “A” grade. However, 2017 showed an upward trend of improvement overall. Medical cannabis, in some form, is now available in 46 states, Puerto Rico, Guam, and the District of Columbia. California received the highest grade of 89.8% (a “B+”). Despite this grade, California patients are still struggling to receive affordable medicine and civil protections. The lowest grade at 23.4% was Wisconsin, receiving an “F” for a barely functioning cannabidiol (CBD) only program. You can view each states grade here.

Which states were the most improved?

Good product safety regulations can swing a state program up nearly a whole letter grade. For example, Alaska improved from a D- to C by adopting regulations for labeling, pesticide testing, and standard operating procedures for medical cannabis business staff.

In addition to adopting strong product safety standards, states with comprehensive programs that improved the most are Louisiana, Massachusetts, and Maryland. Louisiana saw a 16.36% increase because the state passed product safety regulations as well as a bill that extended arrest protections to employees who work in the medical cannabis industry, moving the state one-step closer to providing access for patients. After four years of waiting, Maryland patients finally have access to medicine through over 20 dispensaries which raised Maryland’s grade by 8.8%. Massachusetts had a more modest improvement of 4.4%, after implementing regulations that allow nurse practitioners to issue recommendations and medical cannabis in hospice facilities. The new Massachusetts regulations also fixed some supply issues.

Which states did not improve?

While the national trend for medical cannabis programs was generally one of improvement, there are a few states who saw a decrease in their grade. Two examples are Arizona and Florida. Arizona passed HB2061 which requires providers to issue a mandatory warning about the risks of cannabis while pregnant or breastfeeding; however, there is not yet significant research that backs this claim. While Florida promulgated regulations to implement SB 8A (the bill that implemented a ballot based medical cannabis program), Florida's grade dropped 4.6% due to the Department of Health clarifying the use of dried flowers as not permitted.

What happened to the “F-” grade?

Unlike previous years, no state received an “F-.” This is not to say that states that previously received this grade all markedly improved their programs, but rather it is a distinction that should be reserved for the only four states that have no form of medical cannabis access. These states are Kansas, Idaho, Nebraska, and South Dakota. While no state with a cannabidiol (CBD) only program got a passing grade, these states are at the very least laying a framework for future improvements to medical cannabis programs. For instance, in early 2018 Virginia passed a law allowing doctors to recommend CBD or THC-A for any condition they deem appropriate.

What if I disagree with my state’s score?

While we have done our absolute best to standardize grading, it is only fair to admit that some categories are more subjective than others. It is important to consider that grading legislation is not an exact science. What may look good on paper, may absolutely miss the mark when it comes to serving patients. That is why it is critical for advocates like you to let us know the success and the failures of these programs. We can not offer lawmakers better suggestions if we do not know how these laws and regulations are impacting actual patients.

How to use this report?

Lawmakers can use this report to identify gaps in their legislation and regulations and to establish areas where they can make improvements. The 500 point matrix shows that even in well performing medical cannabis programs, there are still legislative nuances that need to be addressed.

This report is just as much for advocates as it is lawmakers. We want you to share this report with as many people as possible. Share it with your legislators and bring it to campaign events and town hall meetings for candidates in your community who are running for office. With 2018 being a midterm election year, this report offers a great opportunity to get incumbents and challengers on the record about how they will address specific issues regarding your states medical cannabis programs.

With the opioid overdose epidemic claiming over 91 lives a day, this report, along with our report: Medical Cannabis as a Tool to Combat Pain and Opioid Crisis: A Blueprint for State Policy, lawmakers and regulators should have all the information they need to not only improve their programs, but help utilize medical cannabis to decrease opioid addiction and overdose rates in their state.

You can view the full report here.